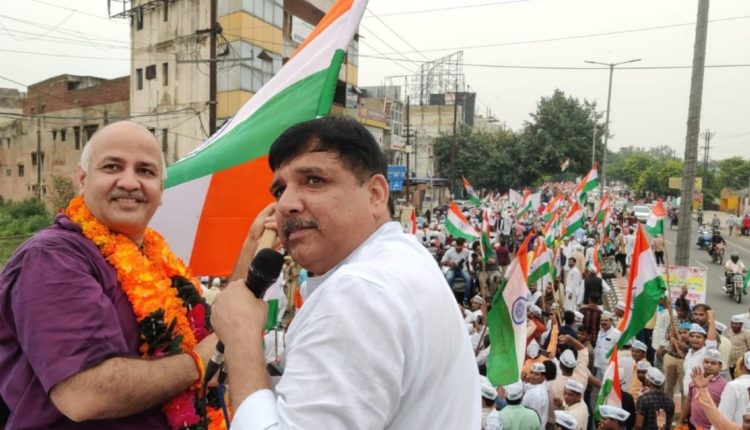 Senior Aam Aadmi Party Leader and Delhi Deputy CM Manish Sisodia on Monday visited the birthplace of Ram Lalla in Ayodhya and sought his blessings to maintain the purity of thoughts. He said that ‘Ramrajya’ is still the highest inspiration for transparent governance and administration. Manish Sisodia also worshiped Hanumanji at Hanumangarhi. He said that he prayed at the feet of Hanumanji to give an opportunity to the Aam Aadmi Party to form the government in Uttar Pradesh. Sisodia said that if the party gets an opportunity to form the government in the state, then the whole country will be like Delhi where world-class education and health facilities will be provided to the people in Uttar Pradesh. Manish Sisodia reached Ayodhya on Monday on his two-day visit. He also took the blessings of saints and monks by visiting Rasik Peeth, Janaki Ghat and Bada Sthan on Monday. He will participate in the Tiranga Yatra organized by the party in Ayodhya on Tuesday.

Manish Sisodia said, “in Ayodhya, Lord Ram set such a standard of governance for the welfare of the people that even today ‘Ram Raj’ is considered to be the highest inspiration for clean governance and administration. With the grace of Lord Ram and the blessings of saints, Aam Aadmi Party under the leadership of Chief Minister Arvind Kejriwal is becoming a new definition of politics of honesty and development. The Tiranga Yatra being taken out by the Aam Aadmi Party in Ayodhya on Tuesday will serve to give a new dimension to the politics of honesty and development. With the blessings of Ramchandraji the Aam Aadmi Party will raise the tricolor and expose the fake and false nationalism of BJP.”

Manish Sisodia accompanied by Party’s State in-charge MP Sanjay Singh, State President Sabhajit Singh and other leaders commenced the Ayodhya Yatra with Hanuman Garhi. After Lord Hanuman’s darshan, everyone recited the Hanuman Chalisa led by Manish Sisodia. They took blessings from Mahant Premdas ji within the temple premises and left to offer their prayers to Ramlalla. After visiting Hanumangarhi, Manish Sisodia said that he sought Lord Hanuman’s blessings to form the AAP government in UP so that by the grace of Lord Ram, the issues of education, health, electricity, water, employment can be worked upon as in Delhi today. He added that he had prayed to the Lord to keep us in His grace and the purity of thoughts. He also visited Rasik Peeth, Janaki Ghat and Bada Sthan and took the blessings of the saints.

Prasad served in the Bhandara in the service of Lord Ram

The Aam Aadmi Party, which is taking out the Tiranga Yatra in the entire state, will be in Ayodhya on Tuesday. Aam Aadmi Party’s Uttar Pradesh State in-charge and Rajya Sabha MP Sanjay Singh said that the Tiranga Yatra that is going to be held in Ayodhya on Tuesday will be historic. The Tiranga Yatra organised by the party has been through Lucknow, Agra and Noida. These Tiranga Yatras have got immense public support. On Tuesday, under the leadership of Delhi’s Deputy Chief Minister Manish Sisodia, the Tiranga Yatra will start from Gulab Bari in Ayodhya. This yatra will reach Gandhi Park via different routes of the city. This yatra, being organized for the glory of the tricolor, will work to expose the fake nationalism of the BJP by showing the true patriotism of AAP. After Ayodhya, this yatra will be organized in all 403 assembly constituencies of Uttar Pradesh.