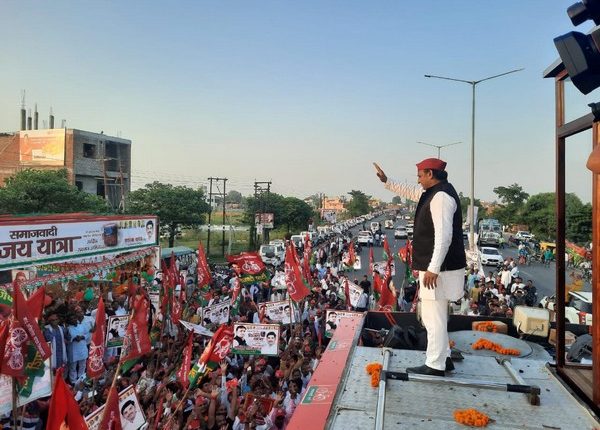 Lucknow, October 14: Slamming the Uttar Pradesh government over the Lakhimpur incident, former Chief Minister of state and Samajwadi Party (SP) leader Akhilesh Yadav alleged that “the BJP government was anti-farmer” and claimed that there will be a regime change in the state soon.

“The BJP workers crushed and killed the farmers with their vehicles. This government is anti-farmer, manure-stealer, and is behind the rise of prices of pesticides,” alleged Yadav.

“Fake Baba will be removed soon,” the SP leader claimed while addressing the ‘Rath Yatra’ ahead of Uttar Pradesh Assembly Election 2022.

Yadav said that in the upcoming Assembly polls the SP will fight in alliance with the small parties. “We will not ally with any national party,” he added.

Yadav is on a ‘Vijay Rath Yatra’ in the state ahead of next year’s Assembly polls.

In the 2017 Assembly elections, the BJP won a landslide victory winning 312 Assembly seats. The party secured a 39.67 per cent vote share in the elections for 403-member Assembly. Samajwadi Party (SP) bagged 47 seats, BSP won 19 while Congress could manage to win only seven seats.