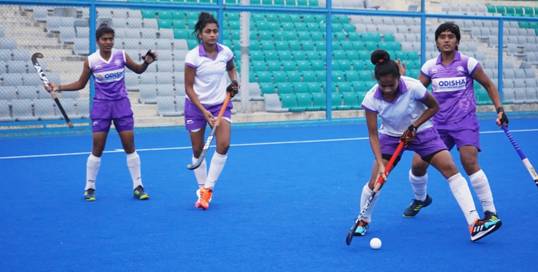 India (14/12/2021): Union Minister for Youth Affairs and Sports Anurag Singh Thakur will inaugurate the first edition ofKhelo India U21 Women’s Hockey League at the iconic MajorDhyan Chand National Stadium, New Delhi on Wednesday (15th December, 2021). The league will be organised from December 15th to 21st December 2021. Ministry of Youth Affairs and Sports has designed this league to give emerging talent an additional opportunity to gain competitive exposure.

Organised by the Sports Authority of India in collaboration with Hockey India, the first phase of the 14-team League will get rolling with a match between Odisha Naval Tata Hockey High Performance Centre, Bhubaneswar and Raja Karan Hockey Academy, Karnal.

The Indian Junior team, preparing for the FIH Women’s Junior Hockey World Cup, will star favourites while two Sports Authority of India squads will want to steal a march on the other sides in the competition. A total of 14 teams will be vying for honours over the course of seven days here.

There is palpable excitement in the women’s hockey fraternity and that is best reflected by former India captain Pritam Rani Siwach. “This is a great opportunity for players from across the country to showcase their talent against the best teams in the country,” said Pritam Siwach, an Arjuna Award winner in 1998 who was bestowed the Dronacharya Award last month.

“I am sure all teams will want to put their best foot forward, even though they are aware that the India Junior team and the two Sports Authority of India sides can be formidable. The League gives the players the chance to  battle with the best sides in a competition in which each match can produce quality hockey,” she said.

The second phase of the tournament will be held at the SAI Centre in Lucknow, before the teams move to the Kalinga Stadium Bhubaneswar, for the climactic stage. The League will sustain the interest in women’s hockey, sparked by the fourth-place finish attained by the Indian team in the Olympic Games in Tokyo earlier this year.

The teams have been divided into two groups as follows:

Elite para athletes are being supported for their customized training under TOPS: Anurag Thakur