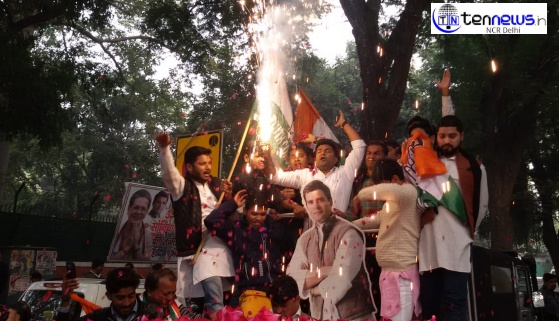 New Delhi : Today in the national Congress Headquarters, supporters celebrated the occasion as they were all sure about the major win of congress in Assembly elections.

All of them were sure about Rahul Gandhi to be the next Prime Minister of India.
Thousands of supporters burnt crackers and shouted the name of Congress at the door of Congress Headquarter.

Congress and BJP in Madhya Pradesh an Rajasthan are both facing equal amount of suspense and contradictions since electoral roles since morning.

One of a Congress supporter when was asked about her opinion regarding winning chance is Congress in 2019 elections, said that,

“Modi is now getting gradually vanished due to his doings that resulted as a loss to the nation. Now India requires someone worth to be a PM and we want Rahul Gandhi to be the one.”

Congress Politician Nitin Raut also spoke at the occasion. He said, “Congress is undoubtly gonna be the 2019 centre government in India because now nation needs someone who really thinks about the betterment of nation.”

“If I talk about BJP in terms of cricket, BJP is at a GTU position today which I expand as ‘Gire To Bhi Taang Upar’.
Today India needs a leader who really works for the welfare of nation. Rahul Gandhi is someone worth to be the nation’s appropriate leader. When working with BJP I realised that Modi is just another corrupt person in the country. It’s just his following that made him win last Lok Sabha Elections .
Rahul Gandhi is from the family of Indira Gandhi, Rajiv Gandhi and he knows it very well that the nation needs a we powerful leader.”