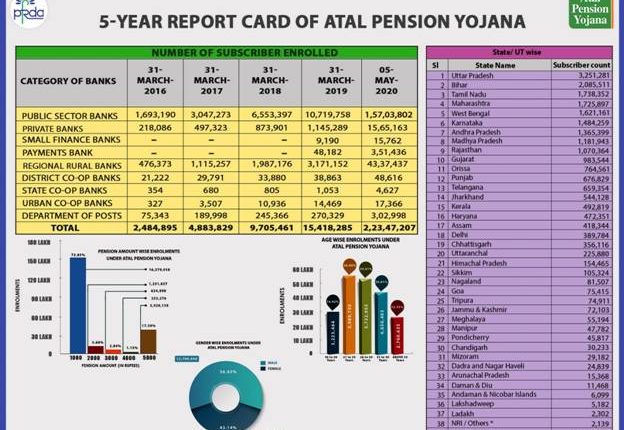 The flagship social security scheme of Government of India ‘Atal Pension Yojana’ (APY) has completed five years of successful implementation. Launched on 9th May 2015 by Hon’ble Prime Minister Shri Narendra Modi with an objective of delivering old age income security particularly to the workers in the unorganised sector and Government providing guarantee of minimum pension after 60 years of age, the scheme even after garnering 2.23 crores workers under the ambit of pension still remains unequivocally relevant for addressing the challenges of rapidly increasing aging population of India. Apart from remarkable enrolments, the scheme has been implemented comprehensively across the country covering all states and Union Territories with male to female subscription ratio of 57:43.

The journey of APY over these five years has been phenomenal and as on 9th May 2020, the total enrolment under the scheme stood at 2,23,54,028.  During the first two years of its launch, almost 50 lacs subscribers were enrolled which doubled to 100 lacs in the third year and the milestone of 1.50 crore was achieved in the 4th year. In the last financial year, almost 70 lacs subscribers were enrolled under the scheme.

Shri SupratimBandyopadhyay, Chairman, Pension Fund Regulatory and Development Authority (PFRDA), which administers Atal Pension Yojana, said ‘this feat of bringing in the most vulnerable sections of the society under the coverage of pension was possible only with the untiring efforts of Public & Private Banks, Regional Rural Banks, Payments Banks, Small Finance Banks, Department of Posts and the support extended by the State Level Bankers’ Committees’.

APY can be subscribed by any Indian citizen in the age group of 18-40 years having a bank account and its uniqueness is attributable to three distinctive benefits. First, it provides a minimum guaranteed pension ranging from Rs 1000 to Rs 5000 on attaining 60 years of age, Secondly the amount of pension is guaranteed for lifetime to spouse on death of the subscriber and lastly, in the event of death of both the subscriber and the spouse, entire pension corpus is paid to the nominee.

The PFRDA Chairman (Shri SupratimBandyopadhyay) said ‘going forward we have a humongous task of increasing the pension coverage as only five per cent of the eligible population has been covered under APY till date and recognising the social importance of this scheme, we continuously undertake proactive initiatives for achievingexponential growth and addressing unexpected scenarios as an when they arise.’

Pension Fund Regulatory and Development Authority (PFRDA) is the statutory Authority established by an enactment of the Parliament, to regulate, promote and ensure orderly growth of the National Pension System (NPS) and pension schemes to which this Act applies. NPS was initially notified for central government employeesrecruits wef 1stJan 2004 and subsequently adopted by almost all State Governments for its employees. NPS was extended to all Indian citizens (resident/non-resident/overseas) on a voluntary basis and to corporates for its employees.

As on 30th April 2020, the total number of subscribers under NPS and Atal Pension Yojana has crossed 3.46crore and the Asset under Management (AUM) has grown to Rs 4,33,555crore. More than 68 lakhs government employees have been enrolled under NPS and 22.60 lakhs subscribers have subscribed to NPS in the private sector with 7,616 entities registered as corporates.