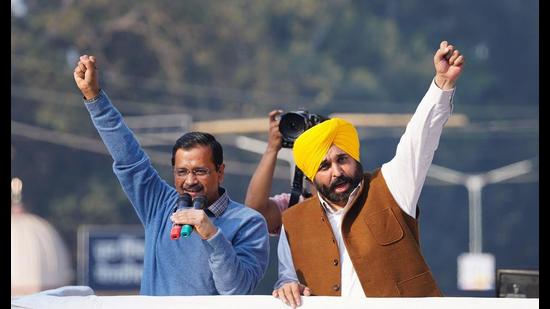 Bhagwant Mann to take oath as Punjab CM on March 16

New Delhi (11/03/2022): Aam Aadmi Party leader Bhagwant Mann will take the oath as the next chief minister of Punjab on March 16.

Mann, the party’s chief ministerial candidate, had earlier said that the oath-taking ceremony will not be held at Raj Bhawan but at Khatkarkalan in Nawanshahr district, the ancestral village of freedom fighter Bhagat Singh.

Mann has invited Delhi Chief Minister and AAP convenor Arvind Kejriwal for the oath-taking ceremony. Mann and Kejriwal will hold a roadshow in Amritsar on March 13 over the party’s victory in the assembly polls.

The Aam Aadmi Party registered a landslide victory in the Punjab polls with 92 seats pushing most of its rivals to the margins. Congress won 18 seats in the 117-member assembly.

Mann today met Kejriwal at his residence in presence of Delhi Deputy CM Manish Sisodia. He touched Kejriwal’s feet and sought his blessings.