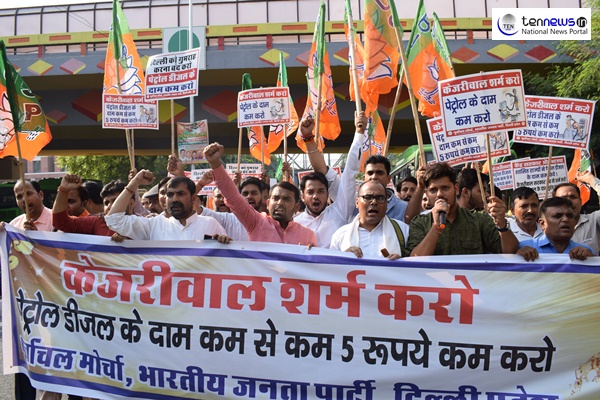 New Delhi: After Delhi Chief Minister Arvind Kejriwal  demanded a Rs 10 per litre cut in fuel prices, hours after the Centre announced a reduction of Rs 2.5 per litre in prices of petrol and diesel.

On Tuesday, Hitting back at Aadmi Party, , Delhi BJP Poorvanchal Morcha held a Protest March towards Aam Aadmi Party Office against Kejriwal Govt on the issue of rising prices of petrol and diesel.

“The prices of crude oil are on the rise in international market. Though the Central Government does not get as much revenue as the state government from taxes on fuel, still the Centre reduced price to the tune of Rs 2.50 per litre. However, the Kejriwal government failed to reduce the price of petrol and diesel. The situation has arisen that residents of Delhi are compelled to get petrol and diesel from nearby states.”

He Further said, “We are Protesting here demanding reduction in fuel prices by the State Government. It’s appalling that the AAP has not joined other states in doing so and it’s a gross injustice to all Delhiites.”

Indo UK Institute of Health signs MoU with Govt. of Uttarakhand to set up Medicity