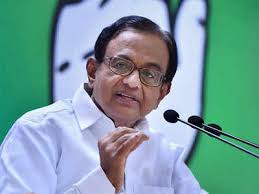 New Delhi: Chairman of the Congress Manifesto Committee, P Chidambaram on Monday launched website to get suggestions for its Manifesto for Lok Sabha 2019, where it wants the common people to give their opinion. Chidambaram heads the panel which is working out the party’s manifesto for 2019 polls, during which the Congress is seeking to defeat the BJP and oust Modi with the help of like-minded parties.

“The Congress party has started writing the Manifesto for 2019 elections. As per the instructions by the party president Rahul Gandhi, we will encourage people to write a manifesto. So that they know what they want. We have formed a committee of 22 members for this. The program had started from October 1 and will be completed in December. We have also taken the support of internet for this and have created a website. On this, people can write their opinion in 16 languages.”

Senior Congress leader P Chidambaram also said that the Prime Minister should make his stand clear on the question of bringing an ordinance to build the Ram Mandir.

“The ordinance is not passed by Parliament. It is done by the executive. If someone is asking for an ordinance to build Ram Mandir, it is for the Prime Minister as the chief of the executive] to respond to,” Chidambaram said, adding, if at all he’ll respond to any issue.

“This is a familiar story. Every 5 yrs before elections, BJP will try to polarise views on RamMandir. Congress party’s position is that the matter is before SC,everyone should wait until SC decides questions before SC. I don’t think we should jump the gun,” added Chidambaram.

#Live #Arbaaz Khan in Delhi for his upcoming movie’s promotion

Fortis Healthcare hands over cheque of Rs 2.5 crore to ICMR from CSR fund in the…