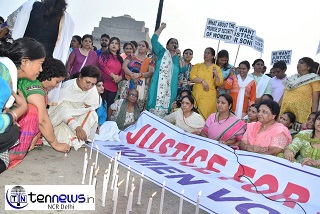 Addressing the Protestors Smt. Rekha Gupta said we are today passing through a sad phase where we have a Chief Minister who became a mass leader leading protests over Nirbhaya issue at this India Gate but today he sits mum watching his party leaders harassing women. She demanded a statement from CM Arvind Kejriwal over Smt. Soni’s unfortunate suicide issue.

Smt. Shaziya Illmi who quit AAP in 2014 said that Arvind Kejriwal is basically anti women rights. This is the reason why Kejriwal has given no work to women in the party as well as in government nor does he gives attention to matters of women harassment.

Smt. Shikha Rai said that there is no place for women in AAP. Be it the killing of Ms. Sunita Koli framed as an accident or this recent murder designed as a suicide of Smt. Soni the CM Kejriwal remains a silent spectator on such issues in which the names of his partymen crop up as accused.

Smt. Vaishakha Salani said today women harassment has become a major issue in Delhi but the CM Kejriwal instead of paying attention to this is busy playing politics all over the country. She demanded that Chief Minister should pay immediate attention to women security in Delhi.