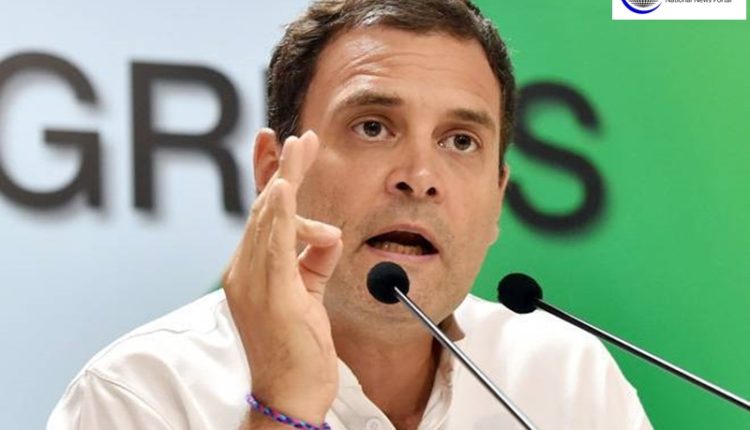 Kozhikode (Kerala), August 17: Congress leader Rahul Gandhi on Tuesday slammed the Centre over demonetisation, GST, and farm laws saying that they are designed to weaken the informal structure of the Indian economy.

The Congress leader was speaking at the inauguration of Karassery Panchayat and felicitation of farmers at Karassery Bank Auditorium in Kerala’s Thiruvambady.

“Demonetisation, GST and now the farm laws are designed to weaken the informal structure of the Indian economy. A consequence of these actions will be that India will simply not be able to give employment to its youth,” said Rahul Gandhi in his address.

“The Indian farmers and the farmers of Wayanad do not ask for much and the heart at that they want is fairness and the level playing field where they can compete with others. Today I say with sadness that our farmers do not have a level playing field and our farmers do not play in a fair environment,” he added.
He further said that the three farm laws will destroy the backbone of Indian agriculture.

“You are aware of their protest across the country in regards to the farm laws. I fully understand their agitation and their stand is absolutely correct because these three farm laws will destroy the backbone of Indian agriculture. The agriculture sector will go from one that helps our farmers to one that will help only two-three large corporates in the country,” said Rahul Gandhi.

He further said that there is weakness in the agriculture sector and the government should improve it.
“We are not saying there is no weakness in agriculture. The government should improve the procurement system instead they are destroying the system. They are destroying the mandis, and this will have unimaginable consequences not only for the farmers but for the middle class for food prices, and for social and for economic stability in the country,” the Congress leader added.

Earlier in the day, the Congress leader held a review meeting with the District Collector in Kalpetta, Wayanad.
Rahul Gandhi is on a 3-day visit to his parliamentary constituency Wayanad in Kerala, from August 16 to August 18.

Union Minister for Food Processing Industries Pashupati Kumar Paras says, efforts are on for early completion of 19 Mega Food Parks in the country

Everything you need to know about Personal Finance