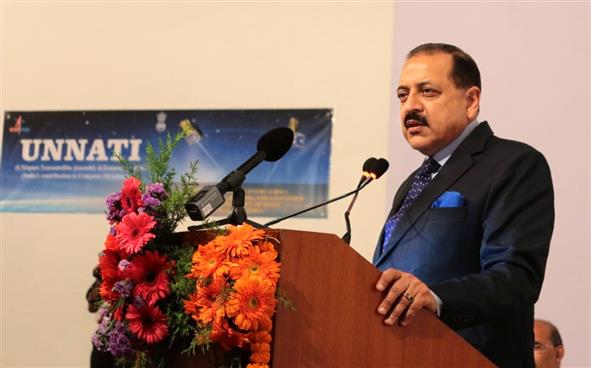 Union Minister for the Development of North Eastern Region (DoNER) and the Minister of State for Prime Minister’s Office; Personnel, Public Grievances and Pensions; Department of Atomic Energy and Department of Space, Dr. Jitendra Singh today inaugurated ‘National Science Day’ with the theme ‘Future of STI: Impact on Education, Skills and Work at General Zorawar Singh Auditorium Complex, University of Jammu. Delivering the inaugural address as Chief Guest, Dr. Jitendra Singh said that with reasonable degree of evidence, space technology has entered every Indian household in one form or the other and the space technology is finding its applications everywhere be that the smart city projects, agricultural technology, remote sensing, railway technology and disaster management in India.

Addressing the academicians, scholars and students on the ‘National Science Day’ here, Dr. Jitendra Singh said that the space technology in India under the present Government is progressing by leaps and bounds and the country is now on the verge of sending humans to space through its ‘Gaganyaan Mission’. The Minister further advised the academicians, scholars and students to visit all the important scientific institutes like Baba Atomic Research Centre, Vikram Sarabhai Space Center and other important scientific installations so as to realize the fact that science cannot be achieved without passion and would be able to develop scientific temper.

Speaking on the advancements of Nuclear Technology in India, Dr. Jitendra Singh praised Dr. Homi J. Baba, Indian Nuclear Physicist for his immense contribution in the field of Nuclear Technology and said that nuclear energy is going to be one of the most common sources of energy for the increasing needs of India especially when the country is focusing on clean sources of energy.

Praising Prime Minister Narendra Modi, Dr. Jitendra Singh said that the cumulative experience and knowledge also gives the sense of scientific intuition and it was the Prime Minister of India who for the first time let the Government to diversify the applications of Space Technology in India and the PM of India, his team has the capacity to take revolutionary decisions like this for the future technological advancement. He further said that scientific perseverance has gained momentum from the last seven years under Prime Minister Narendra Modi and the recently announced National Education policy is one of best steps ever taken taking the scientific studies in vernacular form, will be easily understood by everyone in India without language a bar.

Speaking on the early development of Covid19 vaccine in India compared to the most developed countries in the world, Dr. Jitendra Singh said that the vaccine is not only available in India but is exported to most of the medically advanced nations of the world. And, the equally significant is that not only the vaccine is made but has been successful in imparting scientific social temper among the citizens, the Minister added.

Listing various scientific developments taking place in J&K from last many years, Dr. Jitendra Singh said that Indian Institute of Integrative Medicine has set up a Cannabis Medicine Project with Canadian collaboration, National Institute of High Altitude Medicine at Bhaderwah, the department of Space Studies at Central university of Jammu have been set up and will be a catalyst towards the development of scientific temper among the science students and scholars in J&K.

Earier during the function, Dr. Singh felicitated the students with the academic excellence awards in presence of Professor Manoj K. Dhar, Vice Chancellor, University of Jammu.