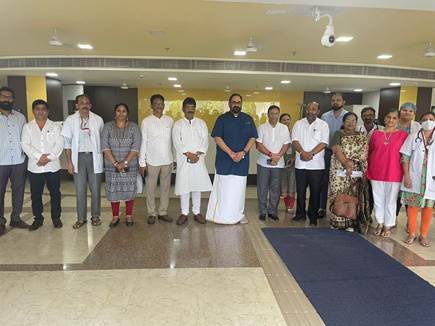 Goa (01/12/2022): The Minister of State for Electronics & Information Technology and Skill Development & Entrepreneurship, Rajeev Chandrasekhar on 30th Nov 2022 said that the Centre will take all measures to expand economic opportunities in Goa that will help diversify its economy, and turn it into a start-ups and innovation hub especially in the fields of healthcare, medical electronics and Artificial Intelligence and also ensure its sustainable development.

He made these observations at a press conference in Margao, Goa on 30th Nov 2022.

Rajeev Chandrasekhar said the Ministries of Electronics and IT, Skill Development and Entrepreneurship along with the Goa government would explore the possibility of setting up a Centre of Excellence for start-ups at the District Hospital South Goa. Earlier in the day, he met the Health Minister of Goa, Vishwajit Pratapsingh Rane.

The Minister who is currently on a two-day visit to Goa, also met state IT Minister, Rohan Khaunte and discussed about the growth of IT opportunities.

He also spoke of expanding skilling opportunities for the young people through Skill hubs and Atal Tinkering labs.

The MoS held several meetings with elected leaders and emphasised on the need for connect with the people at the grassroots. “The neta (leader), zila parishad and panchayat should work together to ensure access of benefits of Central schemes for every beneficiary in South Goa,” he said.

“We have to work towards saturation of all Centre Government schemes and take the message of “SabkaSaath, SabkaVikas” to each and every Indian,” Rajeev Chandrasekhar said.

Earlier, the Minister had visited the District Hospital in Margao. “I have visited many Government hospitals after becoming a Central Minister but the South Goa district hospital ranks the best in terms of cleanliness and modern facilities” he said.

The Minister also attended the inauguration of an art gallery which had on display collection of Jainism-related items through Philately. He also released a 2023 calendar published by the Ayyappa Sevasangham at a programme.