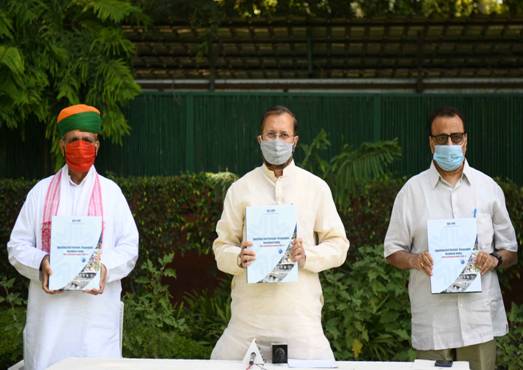 Applauding the critical role played by Central Public Sector Enterprises(CPSE’s) during the ongoing pandemic, the Minister for Heavy industries and Public Enterprises, Shri Prakash Javadekar said, “PSUs are pride of nation and Modi Government is putting emphasis on increasing efficiency, turnover and profitability of these units.”

The Minister along with the Minister of State, Shri Arjun Ram Meghwal today launched a compendium titled -Building Self-Reliance, Self-Resurgent and Resilient India. The compendium is about PSEs contribution during the pandemic. (e-Compendium)

Praising the CPSE’s for maintaining nearly 100 percent goods movement and goods production the Minister said, “Around 71 crores LPG cylinders were supplied to the people, OMCs have given 21 crore free refills to consumers for a period of 3 months from April to June with financial assistance of Rs. 13000 Crore”. He further added that nearly 33 million MT was transported and the CPSE’s also gave medical assistance by providing nearly 11,000 beds in 201 hospitals spread across major cities & remote locations of the country”

Shri Javadekar further said that as the country unlocks and marches towards “AatmaNirbhar Bharat” the role of PSE’s gains even more importanceand expressed happiness that CPSE’s have got back to more than 90% production capacity.

“Today there are total number of 249 operating CPSEs with turnover of more than Rs.25 lakh crores with annual net profit of approximately Rs. 1.75 lakh crores; they pay around 3.62 lakh cr. in the form of dividend, interest, taxes and GST and also the Corporate Social Responsibility expenditure by them is approximately Rs. 3500 crores annually.”, informed the Minister.

Why go for International Undergraduate Education and how do we get to the best?