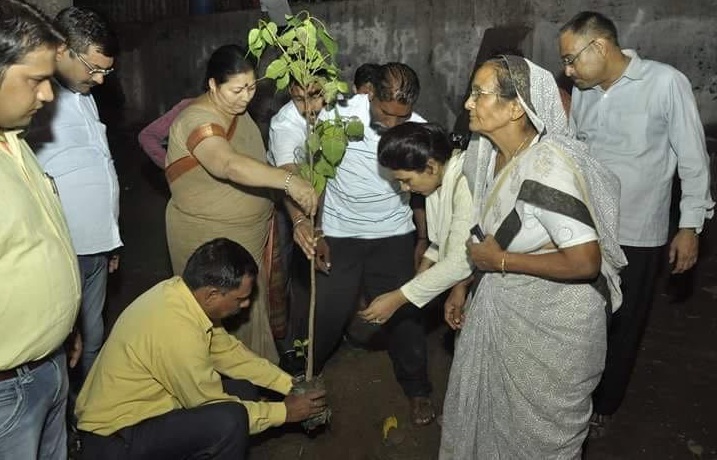 Green drive for peace and environment: By Bipin Sharma

At a time when the ISIS and the enemies of humanity are wreaking havoc on mankind by unleashing terror and barbarity in different parts of the world, the least that the world citizenry can do is be on one page by unequivocally condemning these ghastly acts in one tone and spirit. The recent terror and fidayeen attacks have snatched countless of precious lives and rendered many innocent homeless. The intelligence agencies on their part need to think out of the box for foiling the nefarious designs of the terrorists, as well as for busting the various terror camps that have been responsible for radicalizing many ignorant youngsters. As far as the magnitude of the terror strikes is concerned, it aches to state that we have literally lost count of the human casualties to such dastardly and macabre attacks.

As the menacing wave of terror and hatred rears its ugly head to different parts of the world, there are crusaders of peace like Sudha Bhardwaj who have been motivating people all over the country to plant saplings. The key objective behind her plantation campaign being to not only protect the environment, but to also inspire the citizens towards the larger message of ‘spreading peace and harmony’. While enthusing citizens to plant new saplings, she has also been urging them to undertake a pledge for being the custodians of the saplings that they plant for atleast two seasons. Like any other citizen, Sudha Bhardwaj too is greatly appalled by the rampant and mindless terror strikes that have shaken the entire world, more so since the beginning of 2106.

Sharing her perspective, Sudha Bhardwaj points, “Terrorism and the radicalization of youngsters are the two most burning issues that we collectively need to address. The unabated terror strikes has resulted in a growing sense of insecurity, and shattered the peace of citizens all over the globe. Equally disturbing have been the incidents involving young students going on a rampage and killing scores of innocent students and onlookers like pack of cards. This dangerous trend of brutality and violence needs to be properly introspected with the combined efforts of the educators, psychologists and the investigative agencies. I commend the ‘green initiatives’ undertaken by some schools wherein children are motivated to plant saplings. Participation in a constructive activity such as plantation drive leads to a more holistic transformation, and helps us become better human beings. Rattled by the rising number of terror attacks, I have been encouraging citizens all over the country to indulge in some collective constructive activity by devoting their precious time and efforts towards planting new saplings. I call it the “Greens for Peace” initiative, and it is being done in the larger interest of humanity. If brutal forces like terrorists are hell bent on seeking annihilation of mankind, our green task force is resolute in their mission of sowing the seeds of ‘love, harmony and peace’ which we are doing by means of planting saplings at different points all over the country. I am elated with the overwhelming response to the plantation drive, and wish to take this opportunity to congratulate every citizen, volunteer, activist and the various NGOs who have passionately participated in this campaign. Incidentally our PM Modi too has been emphasizing a great deal on undertaking plantation drives all over the country for primarily protecting the environment, reducing pollution, and for coping with the threat of global warming. Mega plantation campaigns will prove to be very useful in generating awareness amongst citizens towards environment and conservation of natural heritage. The plantations have been carried keeping in consideration the prevalent soil conditions. Since ‘sustenance’ holds the key to ensuring the longevity of the plants, we need to take due care of these plants for atleast two seasons, following which it will be a smooth process.”

“Crusaders like Sudha Bhardwaj are role models for the society who need to be commended for doing an exemplary work in these times of real crisis. It is highly motivating to witness the vibrant involvement of myriads social organizations for a holistic cause such as environment. Green initiatives undertaken by Sudha and her team will not only help in giving a big fillip to the environment, but also play a vital role in unifying different social groups and organizations for one common cause”, says educationist Urmila Kumar.