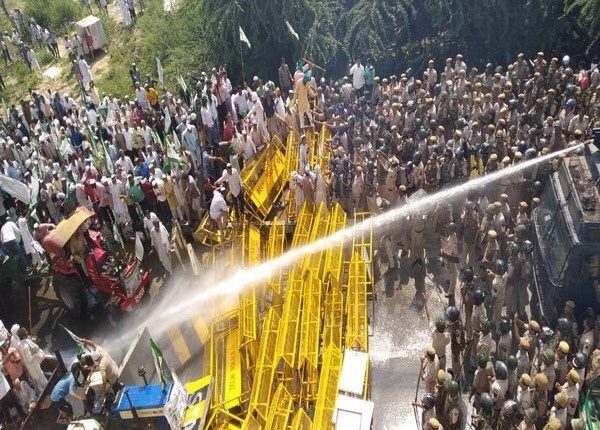 New Delhi: ‘Kisan Kranti Padayatra’ started from Haridwar on October 2, to demand loan waiver, subsidised electricity and fuel, pension for farmers above 60 and many other demands including sugarcane prices, reached Delhi.Farmers gathered at Delhi-UP border during ‘Kisan Kranti Padyatra’ which has been organized by farmers under the banner of Bharatiya Kisan Union were stopped by Police.

A large number of police forces were deployed on the Delhi-UP border, to stop farmers to rally in Delhi. Despite the police warnings, the farmers tried to move forward. After which there was a clash with police on the Delhi border.Police used water cannons, Tear Gas to disperse protesters after protesters broke the barricades.

“On birth anniversary of Mahatma Gandhi, Modi govt has shown that it is no different from the pre-independence British govt in India.British govt then used to exploit the farmers & today Modi govt is firing tear gas shells at farmers.”

RTI revealed 18000 crore that was disclosed from Gujrat.