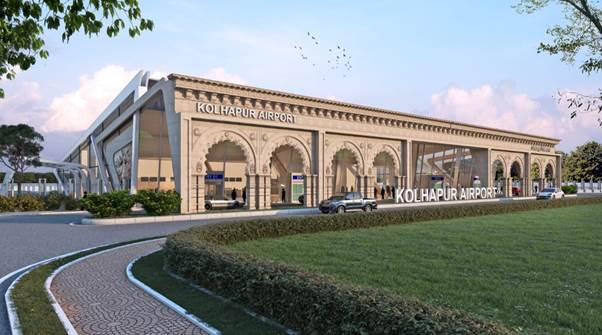 Kolhapur (18/08/2022): Considering the tremendous passenger traffic growth at the Kolhapur airport, Airports Authority of India has undertaken the work for developing the airport for enhanced capacity. The development project includes construction of a new terminal building, strengthening of existing runway, extension of runway, construction of new apron and isolation bay.

Kolhapur Airport has been identified for RCS operations under UDAN scheme and is presently connected to Hyderabad, Bangalore, Mumbai and Tirupati.  Recently Airport Aerodrome license has been upgraded to 24*7 flight operations.

The new terminal building is being constructed in an area of 4000 sqm and will be able to process 300 passengers during peak hours. With 10 check-in counters, the Terminal will be equipped with all modern passenger amenities. The building will be a Four-Star GRIHA rated energy efficient building with sustainability features.The interiors of the terminal building will reflect the art and culture of local culture & heritage. The big archways at the front façade of the new terminal building is influenced and derived from the commonly used arches in the heritage structures like Maharaja Palace, Bhavani Mandap, Panhala Fort of Kolhapur city.

More than 60% of the work for extension of terminal building is complete and the building will be ready by 31stMarch 2023.  Work of upgrading of the airside facilities is completed. Apart from this, a new Air Traffic Control Tower is also being constructed to cater for future traffic growth. Parking area with capacity for 110 car, 10 buses are also part of the development activities.

Kolhapur city is situated on the banks of Panchganga river and is surrounded by Sahyadri mountain ranges. It is a city known for its historical forts, temples and royal places of erstwhile royals. Kolhapur is one of the most agriculturally advanced districts in Maharashtra and is known for being a leading district in agro based industry. It is also a front runner for manufacturing engineering products, refined sugar and textiles.

The new world-class terminal building of the airport will enhance the connectivity to this industrial city, boosting tourism industry of the region.  The increased connectivity will not only create new employment opportunities for the local community provide access to better educational and medical facilities.

India can reduce imports from China by 40 per cent: PHD Chamber