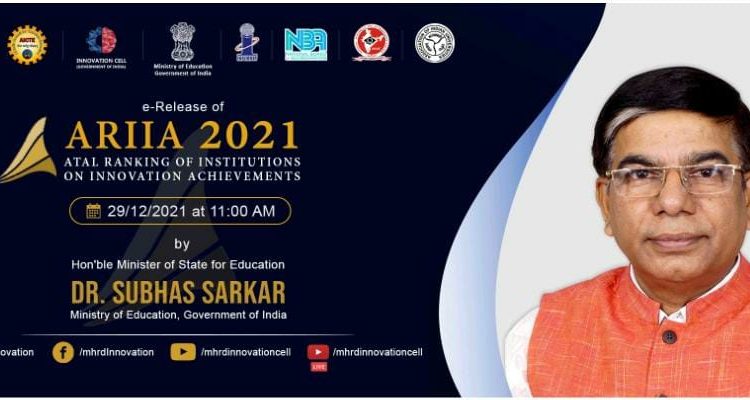 India (28/12/2021): Atal Rankings of Institutions on Innovation Achievements (ARIIA) 2021 will be virtually announced by the Minister of State for Education, Dr. Subhas Sarkar on 29th December 2021.

ARIIA is a very unique joint initiative of Ministry of Education and AICTE to systematically rank higher educational institutions in India on indicators related to Innovation, Startup and Entrepreneurship Development amongst students and faculty. ARIIA critically evaluate institutions on parameters like patent filing and granted, number of registered students and faculty startups, fund generation by incubated startups, specialised infrastructure created by institutions to promote innovation and entrepreneurship, etc.

Prof. Anil Sahasrabudhe, Chairman, AICTE, highlighted said that India is constantly improving on Global Innovation Index (GII) ranking and has now moved upward to 46th position in 2021 from 81st in 2015. We have also emerged as world’s third largest startup hub but still we have huge scope for improvement, he added. He further said that AICTE firmly believes that in coming years, our technical institutes will become fountainhead of next generation technology driven start-ups if we can create a vibrant Innovation and entrepreneurial ecosystem. ARIIA ranking is a major attempt in that direction.

Dr. Abhay Jere, Chief Innovation Officer of Ministry of Education said that the first edition of the ARIIA was launched in 2018 and it has given huge impetus for developing innovation ecosystem in our HEIs. He added that ARIIA-2021, has seen unprecedented participation as compared to earlier editions. This year 1438 institutions (including all IITs, NITs, IISc, etc.) participated as compared 674 HEIs during the 2nd edition of ARIIA (ARIIA-2020) last year. This is more than double as compared to 2nd edition and approximately 4 times as compared to the first edition.