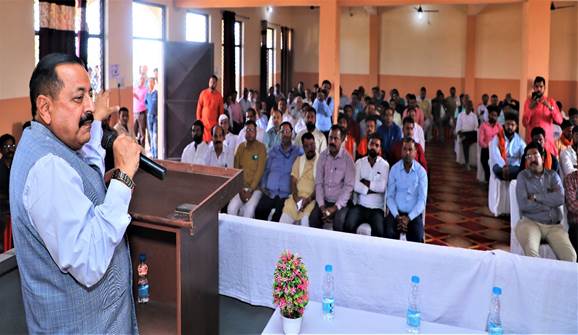 Addressing the students and the youth at Krishna Mahavidyalaya at Thakurdwar in Moradabad, Uttar Pradesh, Dr Jitendra Singh said, NEP-2020 also supplements Start-Up ecosystem with the promise to open new career and entrepreneurship opportunities for students and youth in India.

Dr Jitendra Singh said, NEP- 2020 introduced by Prime Minister Modi will reorient India’s Education Policy as per global benchmarks. Describing it as the biggest path-breaking reform in India since independence, the Minister said, the new policy is not only progressive and visionary but is also in keeping with the emerging needs and requirements of 21st century India. He said, it gives due priorities to the inherent talent, knowledge, skill and aptitude of the students, rather than focusing only on degrees.

Dr.Jitendra Singh said that linking degrees with education has taken a heavy toll on our education system and society as well and one of the fall-outs has been an increasing number of educated unemployed. The Minister said, NEP-2020 is having the provision of multiple entry/exit option thus providing academic flexibility to the students. He said, this will have a positive impact on the students related to the availing of different career opportunities at different times, depending upon their intrinsic learning and inherent aptitude.

Referring to Skill India Mission, Dr Jitendra Singh urged the students to imbibe multiple skills to be successful in life as there are ample number of examples to show that those equipped with the latest skills are doing wonders in the world today.

Dr Jitendra Singh also urged the students and the youth to explore livelihood opportunities in the booming Start-up sector in the country. He informed the gathering that only in August this year, the Uttar Pradesh government injected Rs 4,000 crore into the state’s start-up corpus for employment generation and economic activity. The fresh infusion of capital has been made to constitute the maiden ‘UP Innovation Fund’ that will be mandated to provide seed capital to start-ups.

Dr Jitendra Singh gave full credit to the futuristic vision of Prime Minister Narendra Modi, who had given a call for Start-Up India, Stand-Up India in 2015 itself, that led to a mass interest, as a result of which the number of start-ups in India has increased from mere 350 in 2014 to over 80,000 in 2022 with more than 105 unicorns.

Dr Jitendra Singh noted with satisfaction that Uttar Pradesh government plans to have at least one incubator in every district by 2023. As of now, there are 47 incubators in 20 districts. He told the youth of Moradabad that Uttar Pradesh is catching up fast in startups race and as of today there are more than 6,500 startups already registered in the state. The government has also decided to set up two centres of excellence in the state with one coming up in IIT-Kanpur for promotion of drone technology.

Dr Jitendra Singh said, Noida has turned to be the most preferred destination for startups followed by Ghaziabad, Agra, Lucknow and Gorakhpur in Purvanchal region and now is the time for the innovative minds of the Western UP to take a lead in Startups movement. He said, the green and farm rich belt of Western region can be a fertile ground for Agri-tech and Dairy startups. The Minister promised all support from Ministry of Science and Technology to support the StartUps ecosystem.