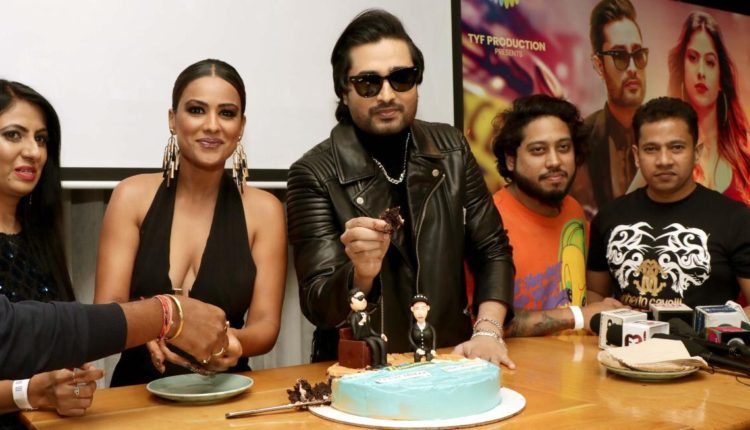 New Delhi (26/12/2021): In Bollywood these days there is an era of recreation of old songs. Sensational actress Nia Sharma and supermodel Yawar Mirza have tried to present the blockbuster song “Saat Samundar Paar” from the film Vishwatma in a new way. Released from Saregama Music, this song has got 2 million views so far. When this song was launched in Mumbai, the entire team including Nia Sharma, Yawar Mirza, Singer Dev Negi, Music Composer Vivek Kar and Lyricist Abhendra Kumar Upadhyay were present. Nia Sharma and Yawar Mirza performed live and the success was celebrated by cutting the cake.

Dev Negi and Nikita Gandhi have given their beautiful voices to the new version of ‘Saat Samandar Paar’. The song ‘Saat Samundar Paar’ has been composed by Vivek Kar. The new lyrics are written by Abhendra Kumar Upadhyay.

Yawar Mirza said that its audio, video and direction are amazing. Views are coming in Millions. I am happy that my first song is getting such a great response. Nia’s performance is amazing and the shots of both of us are going viral on social media.

Nia Sharma said on the occasion of this celebration that I want to congratulate Yawar Mirza for his debut music video. If the audience is liking this song, it feels good. I knew people would compare this song with the original song but it is such a good dance number, I wanted to be a part of it.

Yawar Mirza said that this is the result of the hard work of the entire team. It is well choreographed and directed by Mudassar Khan. Dozens of people work hard in a 3-minute song. Yawar also said that in the last part of this song To Be Continuous is being written, so the public is expecting us that its second part will also come. So lets see, maybe we can bring its sequel too.

Music composer Vivek Kar said that I want to thank Viju Shah, the original composer of Saat Samandar. It was beautifully written by Anand Bakshi ji. This has been our favorite song. While recreating it, I have only kept the hook line the same and have tried everything else.

Lyricist Abhendra Kumar Upadhyay said that it is a matter of pride for me that I have written some lines in the recreation of the song written by Anand Bakshi Sahab.

Dev Negi said that recreating and singing such a big song was a big challenge for all of us, but we tried it in our own way and people are liking it.

The song is Produced by TYF Production Films ,directed and choreographed by Mudassar Khan and co-produced by Ruchikaa Maheshwarii. Dev Negi and Nikhita Gandhi have sung the song . Rapper Enbee Nikhil Budhraja has done the rapping part in the song . The music is composed by Music director Vivek Kar which is written by AbhendraKumar Upadhyay.Suresh Bisveni is the DOP of the song and Lavish Kukreja is Production controller. Yawar Mirza revealed that his next song is Habibi, sung by Naqash Aziz and shot in Dubai.

Newly launched “Bharath Maa” song must be played in all theaters: V…