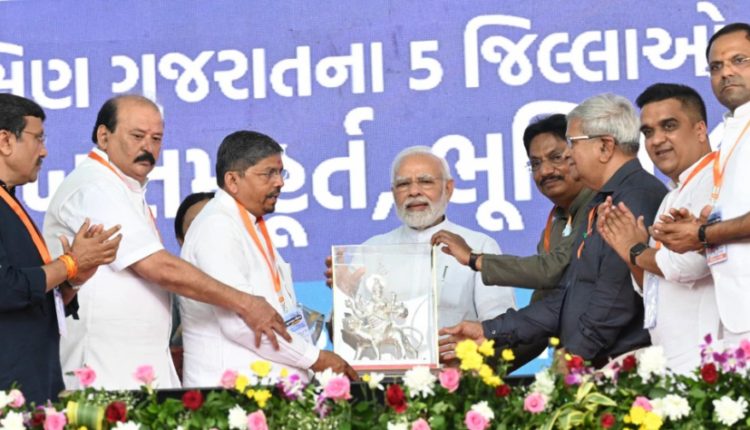 Gujarat (10/06/2022): The Prime Minister, Narendra Modi Prime Minister participated in a programme ‘Gujarat Gaurav Abhiyan’ today. He inaugurated and laid the foundation stone of multiple development initiatives during ‘Gujarat Gaurav Abhiyan’ at Khudvel, a tribal region in Navsari today. This includes the inauguration of 7 projects, foundation stone laying for 12 projects and Bhumi Pujan for 14 projects. These projects will help in improving the water supply in the region, along with boosting connectivity and enhancing the ease of living. Chief Minister of Gujarat Bhupendra Rajnikant Patel, Union and State Ministers and people’s representatives,  were among those present on the occasion.

Addressing the gathering, the Prime Minister noted the enormity of the gathering of the tribal population at the venue. He noted with pride that organizing such programmes indicate the continued affection of the tribal brothers and sisters. He bowed to the land of Navsari acknowledging the glory of tribal potential and determination.

The pride of Gujarat is the rapid and inclusive development in the last two decades and a new aspiration born out of this development. The double engine government is sincerely carrying forward this glorious tradition. He said today’s projects will bring ease of living to Surat, Navsari, Valsad and Tapi districts of South Gujarat, he said.

The Prime Minister recalled how 8 years ago the people of Gujarat sent him to Delhi. In the last 8 years, he said, the government has succeeded in linking many new segments of people and regions with the development process and aspirations. He recalled how there was a time when poor, deprived, dalits, tribals, women and other vulnerable sections used to spend their entire lives meeting just the basic needs. Earlier governments did not make development their priority. Most needy sections and regions were deprived of the facilities. He said that in the last 8 years, following the mantra of Sabka Saath, Sabka Vikas, his government has laid the utmost emphasis on the welfare of the poor, on providing basic facilities to the poor. Now, he continued, the government has embarked upon the programme of 100 per cent empowerment of the poor through saturation of the welfare schemes. The Prime Minister, before reaching the main stage, interacted with the beneficiaries from the tribal communities. He said contact with the public and beneficiaries provides new momentum to the support for development.

Speaking in Gujarati, the Prime Minister recalled his long association with the local people. He remembered the hospitality and affection of the people during those times when he was working in the region. “Your affection and blessings are my strength”, said a visibly moved Prime Minister. He said that children of the tribal communities should get all the possible opportunities and noted their qualities of cleanliness, wisdom, organization and discipline. He also talked of the values of community living and environment protection among the tribal people. He also talked of his work for ensuring water in the tribal areas. Today’s projects with more than 3 thousand crore rupees are in stark contrast from earlier days when even something as small as inauguration of a water tank used to hog headlines, he said. He said continuous welfare and projects of development have been part of his governance style for long and these projects are aimed for the welfare of people and garib kalyan and are way beyond any electoral consideration. Every poor, every tribal living in howsoever inaccessible area is entitled to clean water, that is why such big projects are undertaken, he continued that it has been the hallmark of the Prime Minister that poth foundation stone laying and inauguration is done by him, a massive change in work culture for timely delivery of the projects. “We treat being in government as an opportunity to serve”, he emphasized. We are committed that the problems faced by the older generation are not faced by our new generation. That is why these schemes are ensuring basic facilities like clean water, quality education for all, he said. He recalled a time when there was not even a science school in the region whereas now medical colleges and universities are coming up. Lives are changing through infrastructure, education, business, connectivity related schemes in the most far-flung areas, the Prime Minister said. He also praised Dang district and South Gujarat for adopting natural farming. Education in the mother tongue, even for technical courses like medical and engineering, will open chances for OBC, tribal children, he said. He also praised the state government for implementing the new phase of Van Bandhu Yojana.We are working for holistic, inclusive and equitable development, the Prime Minister concluded.

The Prime Minister inaugurated the Madhuban dam based Astol regional water supply project, built at the cost of about ₹586 crores. It is a marvel of water supply engineering skills. Also, ‘Nal Se Jal’ projects worth ₹163 crores were inaugurated by the Prime Minister. These projects will provide safe and adequate drinking water to the residents of Surat, Navsari, Valsad and Tapi districts.

The Prime Minister laid the foundation stone of 8 water supply projects worth ₹549 crores, to provide clean drinking water to the residents of Surat, Navsari, Valsad and Tapi districts. The Foundation stone of a wide road connecting Khergam and Pipalkhed, to be built at the cost of ₹33 crores in Navsari district, was also laid. Another four-lane road will be constructed between Navsari and Bardoli via Supa, at a cost of about ₹27 crores. The Prime Minister also laid the foundation stone for the construction of Zila Panchayat Bhavan and for providing and fixing a roller crash barrier in Dang at a cost of about Rs 28 crores and 10 crores respectively.

Educrack, an EdTech platform that declines INR 20 Crore funding in order to stay out of the valuation game and stay focussed on delivering quality education.