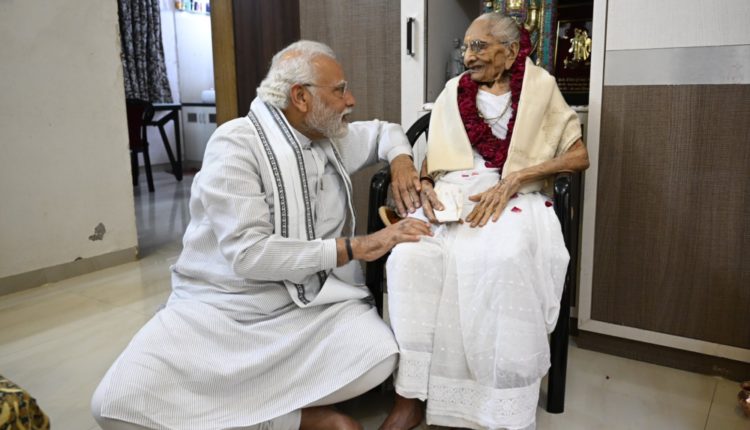 India (18/06/2022): As his mother is entering her hundredth year, PM Narendra Modi penned an emotional blog. He recollected some special moments from his childhood that he spent with his mother. He recalled several sacrifices made by his mother as he grew up and mentioned various qualities of his mother that have shaped his mind, personality, and self-confidence.

“Today, I feel extremely happy and fortunate to share that my mother Smt. Heeraba Modi is entering her hundredth year. This is going to be her birth centenary year.” wrote PM Modi.

A symbol of resilience

Recalling hardships his mother faced during her childhood, PM Modi said, “My Mother is as simple as she is extraordinary. Just like all mothers.” At a tender age, PM Modi’s mother lost her mother. He said, “She does not even remember my grandmother’s face or the comfort of her lap. She spent her entire childhood without her mother.”

He recalled the tiny house in Vadnagar with mud walls and clay tiles for a roof where he stayed with his parents and siblings. He mentioned innumerable everyday adversities that his mother encountered and successfully overcame.

He mentioned how his mother not only did all household chores by herself but also worked to supplement the meagre household income. She used to wash utensils at a few houses and take out time to spin the charkha to help meet the household expenses.

PM Modi reminisced “During the rains, our roof would leak, and the house would flood. Mother would place buckets and utensils below the leaks to collect the rainwater. Even in this adverse situation, Mother would be a symbol of resilience”. 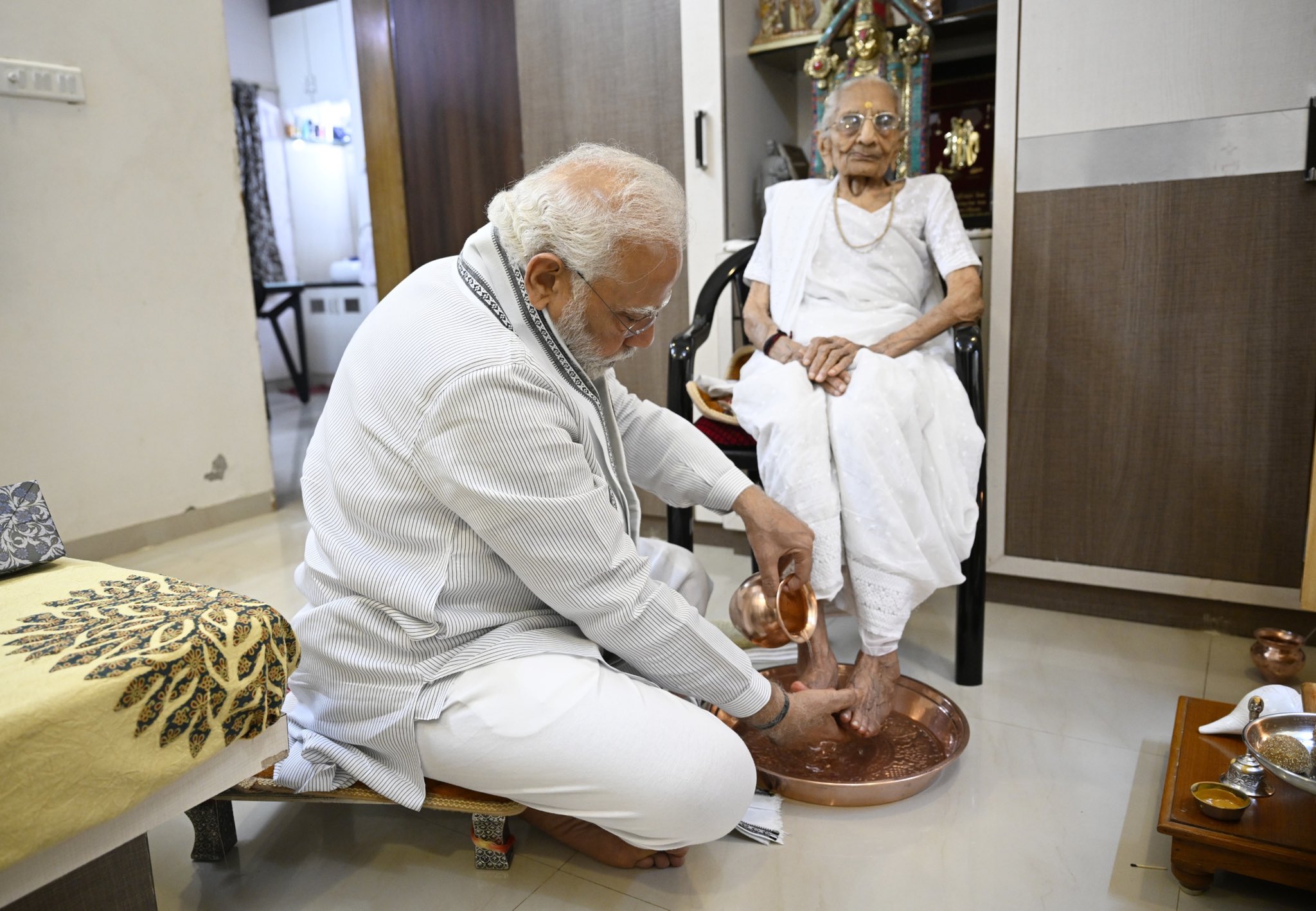 Deep respect for those engaged in cleanliness

PM Modi said that his mother had a deep respect for those involved in cleaning and sanitation. Whenever someone would come to clean the drain adjacent to their house in Vadnagar, his mother wouldn’t let them go without giving them tea.

Finding happiness in others’ joys

PM Modi mentioned that his mother would find happiness in other people’s joys and was extremely large hearted. He recalled “A close friend of my father used to stay in a nearby village. After his untimely death, my father brought his friend’s son, Abbas, to our home. He stayed with us and completed his studies. Mother was as affectionate and caring towards Abbas just like she did for all of us siblings. Every year on Eid, she used to prepare his favourite dishes. On festivals, it was commonplace for neighbourhood kids to come to our house and enjoy Mother’s special preparations.”

In the blog post, PM Modi highlighted the only two instances when his mother accompanied him publicly. Once, it was at a public function in Ahmedabad when she applied tilak on his forehead after he had returned from Srinagar where he had hoisted the national flag at Lal Chowk completing the Ekta Yatra. The second instance was when PM Modi first took oath as Gujarat’s Chief Minister in 2001.

PM Modi wrote that his mother made him realise that it was possible to be learned without being formally educated. He shared an incident when he wanted to publicly honour all his teachers, including his biggest teacher – his mother. However, his mother declined saying, “See, I am an ordinary person. I may have given birth to you, but you have been taught and brought up by the Almighty.”

PM Modi further added that though his mother did not come to the event, she made sure that he called someone from Jethabhai Joshi Ji’s family – his local teacher, who taught him alphabets. “Her thought process and farsighted thinking have always surprised me,” he said.

PM Modi’s mentioned that as a dutiful citizen his mother has voted in every election since the time elections began, from Panchayat to Parliament.

PM Modi’s said that his mother remains abreast with current developments in the world. He mentioned in his blog. “Recently, I asked her how long she watches TV every day. She replied that most people on TV are busy fighting with each other, and she only watches those who calmly read out the news and explain everything. I was pleasantly surprised that Mother keeps track of so much.”

Sharp memory despite her age

PM Modi shared another instance from 2017 that showcases his mother’s alertness despite her old age. In 2017, PM Modi had gone to meet her directly from Kashi and had carried prasad for her. “When I met Mother, she immediately asked me if I had paid obeisance to Kashi Vishwanath Mahadev. Mother still uses the full name – Kashi Vishwanath Mahadev. Then during the conversation, she asked me if the lanes that lead to the Kashi Vishwanath Temple are still the same, as if there is a temple inside someone’s household premises. I was surprised and asked when she visited the temple. She revealed that she had gone to Kashi many years back, but surprisingly remembered everything,” said PM Modi.

PM Modi further elaborated that his mother not only respects others’ choices but also refrains from imposing her preferences. “In my own case especially, she respected my decisions, never created any hurdles, and encouraged me. Since childhood, she could feel that a different mindset grew inside me.” mentioned PM Modi.

It was PM Modi’s mother who gave him full support when he had decided to leave his home. Understanding his desires and blessing him, his mother said, “Do as your mind says.”

PM Modi said that his mother has always inspired him to have a strong resolve and focus on garib kalyan. He shared an instance from 2001 when he had been declared as the Chief Minister of Gujarat. After reaching Gujarat, PM Modi went straight to meet his mother. She was extremely ecstatic and told him, “I don’t understand your work in the government, but I just want you to never take a bribe.”

His mother keeps assuring him that he should not worry about her and remain focused on the larger responsibilities. Whenever he speaks to her on the phone, his mother says, “Never do anything wrong or anything bad with anyone and keep working for the poor.”

PM Modi further added, “In my mother’s life story, I see the penance, sacrifice, and contribution of India’s matrushakti. Whenever I look at Mother and crores of women like her, I find there is nothing that is unachievable for Indian women.”

“Far beyond every tale of deprivation, is the glorious story of a mother,

Far above every struggle, is the strong resolve of a mother.”

Today, New India is proudly living its ancient identity along with its modern aspirations: PM Modi