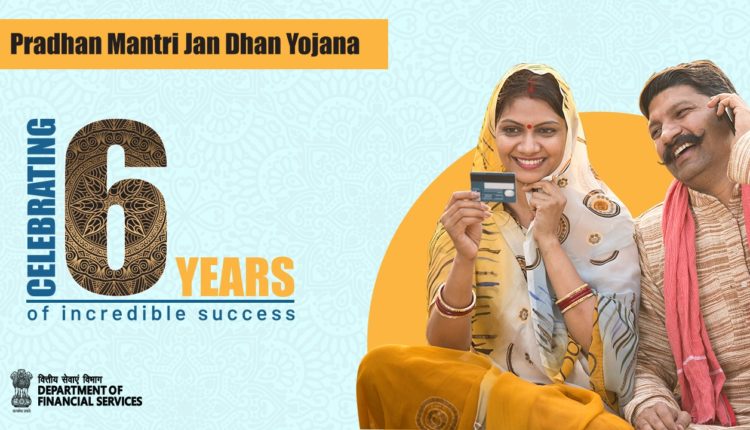 Ministry of Finance is committed to provide financial inclusiveness and support to the marginalized and hitherto socio-economically neglected classes. Financial Inclusion is a national priority of the Government as it is an enabler for inclusive growth. It is important as it provides an avenue to the poor for bringing their savings into the formal financial system, an avenue to remit money to their families in villages besides taking them out of the clutches of the usurious money lenders. A key initiative towards this commitment is the Pradhan Mantri Jan Dhan Yojna (PMJDY), which is one of the biggest financial inclusion initiatives in the world.

PMJDY was announced by Prime Minister, Shri Narendra Modi in his Independence Day address on 15th August 2014. While launching the programme on 28th August, the Prime Minister had described the occasion as a festival to celebrate the liberation of the poor from a vicious cycle.

On the 6th Anniversary of PMJDY, Union Minister for Finance & Corporate Affairs , Smt. Nirmala Sitharaman reiterated the importance of this Scheme “The Pradhan Mantri Jan Dhan Yojana has been the foundation stone for the Modi government’s people-centric economic initiatives. Whether it is direct benefit transfers, COVID-19 financial assistance, PM-KISAN, increased wages under MGNREGA, life and health insurance cover, the first step was to provide every adult with a bank account, which PMJDY has nearly completed.” she said

Minister of State for Finance & Corporate Affairs, Shri Anurag thakur also expressed his thoughts for PMJDY on this occasion. He said “Under the leadership of Prime Minister Narendra Modi, PMJDY has brought the unbanked into the banking system, expanded the financial architecture of India and brought financial inclusion to over 40 crore account holders. A majority of the beneficiaries are women and most of the accounts are from rural India. In today’s COVID19 times, we have witnessed the remarkable swiftness and seamlessness with which DBTs have empowered and provided financial security to the vulnerable sections of society. An important aspect is that DBTs via PM Jan Dhan accounts have ensured every rupee reaches its intended beneficiary and prevented systemic leakage.”

As we complete 6 years of successful implementation of this Scheme, we take a look at the major aspects and achievements of this Scheme so far.

The scheme was launched based upon the following 6 pillars:

4.     Important approach adopted in PMJDY based on past experience:

5.      Extension of PMJDY with New features – The Government decided to extend the comprehensive PMJDY program beyond 28.8.2018 with some modifications

Ø  During first year of scheme 17.90 crore PMJDY accounts were opened

Ø  Continuous increase in no of accounts under PMJDY

Ø  As per extant RBI guidelines, a PMJDY account is treated as inoperative if there are no customer induced transactions in the account for over a period of two years

Ø  Avg. Deposit per account has increased over 2.5 times over Aug’15

Ø  Number of RuPay cards & their usage has increased over time

A mobile application, was launched to provide a citizen centric platform for locating banking touch points such as bank branches, ATMs, Bank Mitras, Post Offices, etc. in the country. Over 8 lakh banking touchpoints have been mapped on the GIS App. The facilities under Jan Dhan Darshak App could be availed as per the need and convenience of common people. The web version of this application could be accessed at the link http://findmybank.gov.in.

This app is also being used for identifying villages which are not served by banking touchpoints within 5 km. these identified villages are then allocated to various banks by concerned SLBCs for opening of banking outlets. The efforts have resulted in significant decrease in number of such villages.

As per announcement made by the Hon’ble Finance Minister on 26.3.2020, under PM Garib Kalyan Yojana, an amount of Rs. 500/- per month for three months (April’20 to June’20), was credited to the accounts of women account holders under Pradhan Mantri Jan Dhan Yojana (PMJDY). A total of Rs. 30,705 crore have been credited in accounts of women PMJDY account holders during April-June, 2020.

As informed by banks, about 8 crore PMJDY accountholders receive direct benefit transfer (DBT) from the Government under various schemes. To ensure that the eligible beneficiaries receive their DBT in time, the Department takes active role in identification of avoidable reasons for DBT failures in consultation with DBT Mission, NPCI, banks and various other Ministries. With close monitoring in this regard through regular VCs with banks and NPCI, the number of DBT failure due to avaoidable reasons has observed significant decline from 5.23 lakh (0.20%) in Apr’19 to 1.1 lakh (0.04%) in Jun’20.

i.  Endeavour to ensure coverage of PMJDY account holders under micro insurance schemes. Eligible PMJDY accountholders will be sought to be covered under PMJJBY and PMSBY. Banks have already been communicated about the same.

ii. Promotion of digital payments including RuPay debit card usage amongst PMJDY accountholders through creation of acceptance infrastructure across India