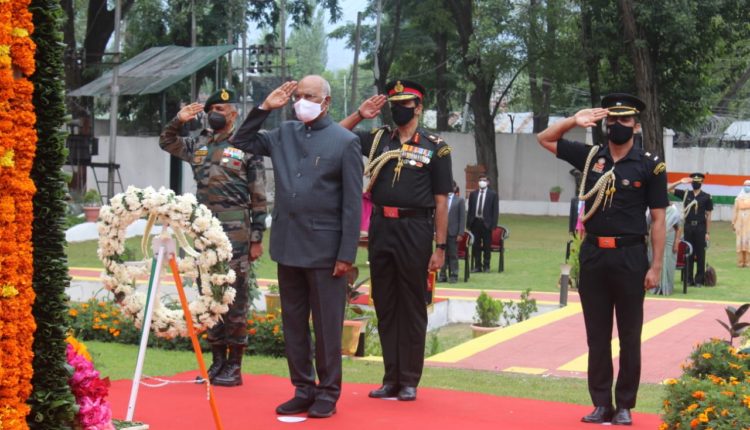 The Hon’ble President of India, Ram Nath Kovind visited Baramulla as a Chief Guest on the 22nd anniversary of Kargil Vijay Diwas. The Hon’ble President of India was accompanied by the Lieutenant Governor of the Union Territory of Jammu and Kashmir, Manoj Sinha and Lieutenant General DP Pandey, General Officer Commanding Chinar Corps. He paid homage to the indomitable courage and sacrifice of Indian Armed Forces personnel during Kargil conflict in 1999 by laying wreath at the Dagger War Memorial in Baramulla in a solemn ceremony.

The President was received by Major General Virendra Vats, General Officer Commanding Baramulla Division and was briefed about the town’s history highlighting the contribution of the town in various operations post-independence. The Hon’ble President of India thereafter interacted with the soldiers of Baramulla Division and wished them luck for all future endeavors. After visiting Baramulla, the Hon’ble President of India proceeded to Gulmarg and visited the High Altitude Warfare School. He was briefed on the various facets of training being carried out at the High Altitude Warfare School.

Dismayed over Yediyurappa’s resignation, supporters in his hometown shut shops