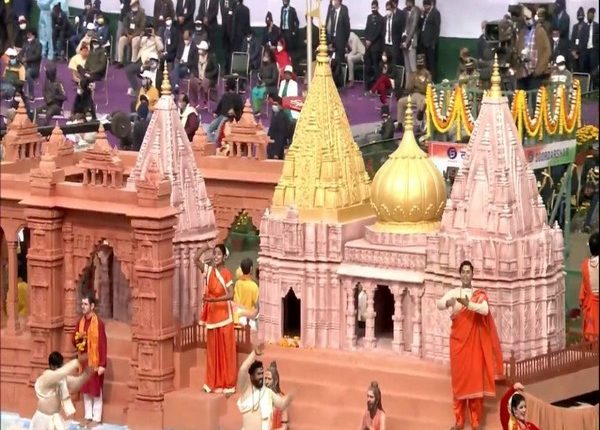 New Delhi [India], January 26: The tableau of Uttar Pradesh at the Republic Day parade this year showcased Kashi Vishwanath Dham’s glorious history and achievements achieved through skill development and employment through the One District One Product (ODOP) scheme.

The tableau shows the achievements achieved through skill development and employment through One District One Product (ODOP) which is based on the new micro, small and medium enterprise policy and industrial development policy of the state government. The development which has taken place in the world-famous Kashi Vishwanath corridor is also exhibited.

In the front portion of the tableau, the products of each district have been shown which showcases the fast growth of the economy of the state through traditional crafts, weavers and handicrafts products.

In the central part of the tableau, the culture of sadhus and priests offering argh to the sun at various ghats of Varanasi along with their morning prayers have been shown.

In the rear portion of the tableau, the Kashi Vishwanath Dham has been shown showcasing the glorious history of the world’s ancient city Varanasi. The name of Varanasi city is made from two rivers Varuna and Assi. The Jyotirling of Lord Vishweshwar is revered in Kashi Vishwanath Dham which is situated in the heart of the city and western ghat of Mokshyadani Maa Ganga. The mere sight of this Jyotirlinga leads to spiritual tatvgyan and moksha. The construction of this temple was done by the queen of Indore Ahilyabai Holkar in 1780 A.D.
India is celebrating its 73rd Republic Day today.

As many as 21 tableaux including those 12 states and nine ministries or government departments are a part of the Republic Day parade.

Infosys named the fastest-growing IT services brand in the world