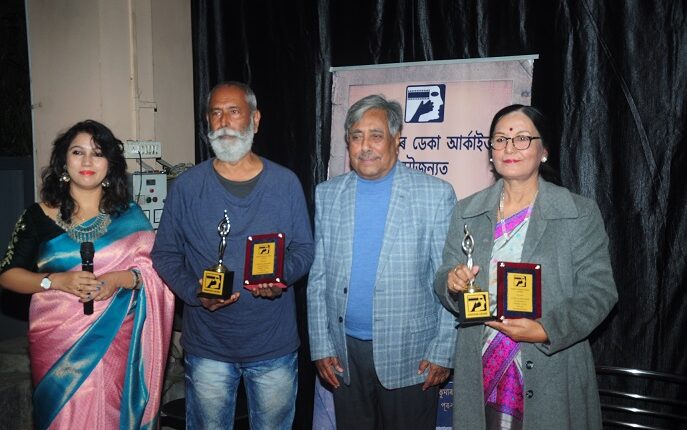 The prestigious Roopkar Awards, instituted in the memory of distinguished cine-journalist and litterateur Pabitra Kumar Deka, was presented to noted actor of theatre and cinema Pranjal Saikia and National Award-winning filmmaker Mridul Gupta for the years 2021 and 2022 respectively, in a low-key function held at the premises of the Pabitra Kumar Deka Archive, on January 5. The awards, given away biennially, were presented by the State’s eminent litterateur and former editor of Asomiya Pratidin, Nitya Bora. In his keynote speech, Bora spoke about Pabitra Kumar Deka’s significant and memorable contributions to Assamese culture and literature. “He has written extensively on a wide range of film-related subjects, inspiring and mentoring a number of aspiring journalists to take up film journalism as a career. It was Pabitra Kumar Deka who introduced the very concept of film publicity in Assam that really helped in garnering widespread appeal and visibility to cinema. Not many are aware of this, but he was once an active and key organiser of a political party. His unflagging enthusiasm has always been a great source of inspiration to me,” Bora said, while speaking about his close association with Deka. Purnima Pathak Saikia, who received the award on behalf of her husband Pranjal Saikia, spoke about Deka’s significant contribution to the State’s cultural heritage. Mridul Gupta profusely thanked the organisers for honouring him. Interestingly, Gupta’s new movie, made in the Karbi language – Mirbeen, won the Best Asian Film in the Tokyo Film Awards 2023. The awardees also spoke about their experiences with Deka.

Shehnaaz Gill seen serving tea to crew on set. What could it be?