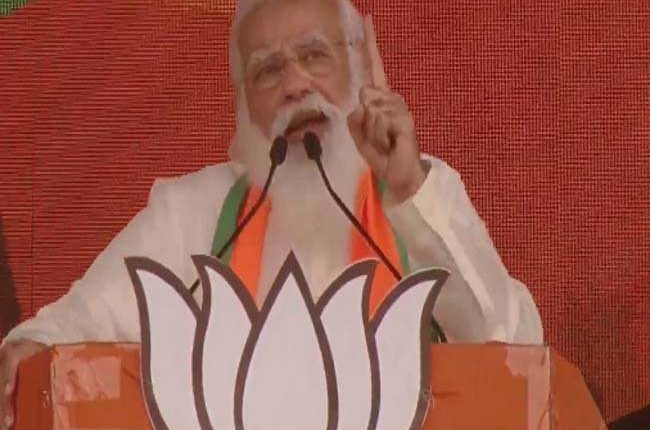 In a sharp rebuttal to Trinamool Congress’ ‘Khela Hobe’ (Game On) slogan, Prime Minister Narendra Modi on Sunday said that because of the corruption and loot in Mamata Banerjee’s government, her party’s game is over and the BJP’s lotus will bloom in West Bengal.

Addressing a public rally in Kolkata’s Brigade Parade Ground, the Prime Minister said ‘Didi’ Mamata Banerjee changed over the years, and not is being ‘controlled’ by somebody.

“Nothing is hidden. Bengal knows everything. But this Khel (game) will not continue. Khel Khatam hona chahiye (this game must stop)…TMC ka Khela khatam, Vikas Shuru (TMC’s game is over, development has started)…vote for BJP fearlessly, vote against bad governance,” the Prime Minister said.

Taking a dig at TMC, he said people of the opponent party are experienced people and play a lot. “They have done innumerable corruption and looted the people of Bengal. They have even looted the relief money sent for Amphan cyclone.”

He said that TMC did “Tolabaazi, syndicate, commission cut” during its tenure, and the ruling party during its tenure did so many scams that a ‘Corruption Olympics’ game can be organised here.

“You have played with the hard-earned money of the people and their lives,” he said.

“I have known Didi for ages. She is not the same person who raised her voice against the Left. She speaks someone else’s language now and is being controlled,’ the PM claimed further.

He further alleged TMC has pushed Bengal towards separation instead of development and divided people into religious lines. “And thus the lotus is blooming,” he added.

During the Prime Minister’s rally in Kolkata today, BJP inducted veteran actor turned politician Mithun Chakraborty into the party. With this, Chakraborty joined the long list of former TMC members to join BJP including Suvendu Adhikari, Rajib Banerjee and more, in the run-up to Assembly elections.

West Bengal is likely to witness a triangular contest this time with TMC, Congress-Left alliance and the BJP in the fray.

The Assembly elections in the state will be held in eight phases starting from March 27 with the final round of voting taking place on April 29. The counting of votes will take place on May 2.