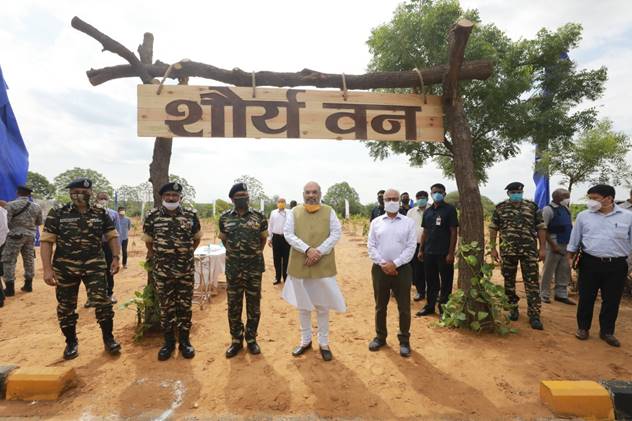 The Union Home Minister, Shri Amit Shah today said the Central Armed Police Forces (CAPFs) personnel across the country are not only providing security at various locations across the country such as airports, and railway stations and fighting the scourge of terrorism, but are also contributing in the nation’s battle against the COVID-19 pandemic. Launching the CAPFs nationwide tree plantation drive in Gurugam, Haryana today, Shri Shah said the CAPFs have lost more than 31 Jawans to the pandemic and paid his respects to them on this occasion.The Home Minister said this tree plantation campaign is being undertaken at a time when the world is faced with this pandemic.

The Home Minister said across the world only governments are fighting this pandemic, but here in India, 130 crore people besides State Governments are united in fighting this threat. Nowhere across the country is there is a state of panic, in fact we are committed in facing this challenge and are resolute in overcoming this pandemic. In this fight, our CAPFs are playing a very important role, – whether it be markets, railway stations, whether state governments have sought support in managing crowded places or the local police have sought the support of our security forces in enforcing the lockdown, the Jawans of our security forceshave not been found wanting. The Union Home Minister salutedthe Corona Warriors of the CAPF who not only provide security and fight terrorism, but also set an example before the nation and the world by being alert during deployment on COVID-19 duty, without bothering about their own life and safety.

The Union Home Minister said that the nationwide CAPF tree plantation drive has set a target of 1.37 crore saplings. Shri Amit Shah, quoting from an ancient Hindu text, said a tree is worth more than ten sons.

Shri Amit Shah said we should harness natural resources and not exploit them. He said our sages had long ago emphasised that one must not exploit Nature but instead must support Nature. However, today due to consumerism, this balance has been disturbed and as a result we are facing the challenges of Climate Change and Global Warming.  Due to exploitation of Nature, the ozone layer is depleting. We are emitting more carbon di-oxide and carbon mono-oxide into the environment and without the ozone layer life is not possible.

Emphasising on the important role played by trees in reducing pollution, Shri Amit Shah said that various varieties of saplings have been chosen in this plantation drive such as peepal, jamun, neem, vatavriksh, burgud based on their oxygen giving capability and abilities to survive in different seasons. He said several programmes are being run on environmental protection but only tree plantation can check pollution and save the Earth.

Shri Amit Shah said the Prime Minister, Shri Narendra Modi participated in the Paris World Environment Summit where he cautioned the world against overexploitation of Nature and the world accepted the Modi Formula in the Paris Declaration on tackling Climate Change. As a result of the Prime Minister’s efforts, the International Solar Alliance was set up in India, he said.It was during Shri Narendra Modi’s tenure as Chief Minister of Gujarat that it became the first state in India where a separate department was set up on environmental protection. The Prime Minister has also stressed on use of green fuels and has encouraged the use of ethanol blended petrol, Shri Amit Shah said. The Union Home Minister pointed out that various programmes of the Government of India such as 8 crore free cylinders to rural households are also environment friendly.

Shri Amit Shah concluded his address by saying that the CAPFs must ensure that the tree plantation drive should not be seen as the conclusion. It must be ensured that the saplings are taken care of till they are able to sustain on their own. “I commend the brave CAPF Jawans and applaud them for not only protecting and securing the nation but also having undertaken this massive campaign to plant more than one crore saplings of long lasting trees,” he said.

On the occasion Shri Amit Shah planted a sapling of the ‘peepal’ tree. The Union Home Secretary, Shri Ajay Kumar Bhalla, DGs of the 7 CAPFs and senior officials were also present. To mark the plantation drive, more than 10 lakh saplings are being planted at various locations of the Central Armed Police Forces (CAPFs) throughout the length and breadth of the country.

Inspired by the vision of the Prime Minister Shri Narendra Modi and under the leadership of the Union Home Minister Shri Amit Shah, the CAPFs have initiated this tree plantation drive since February, 2020 with an aim to plant more than one crore trees during this year. A timetable was drawn up on the appropriate species to be planted in specified sectors and a nodal officer appointed for the purpose. It was decided that as far as possible local plant species should be planted and at least half of the total plantation be constituted of long lasting trees with a lifecycle of 100 years or more. Besides, care was taken that medicinal and environment friendly trees be preferred.

The tree plantation by the Union Home Minister has inspired commitment of the CAPF personnel towards environmental issues. The tree plantation drive is an initiative of the CAPFs towards Green India and underlines the resolve of the paramilitary forces to protect the environment apart from ensuring internal and external security. These saplings are being planted by the CAPF personnel by contributing voluntary labour. Till 30th June, 2020 more than 20 lakh saplings have been planted by all CAPFs across different regions of the country. The CAPFs will undertake similar campaigns in the years to come.