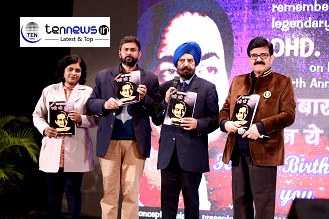 On this occasion, music lovers were present in large numbers besides well
known personalities from different fields were present. Many singers from
Mumbai, Amritsar and Delhi paid musical tributes to Mohammad Rafi Sahab. The
function was organised by Golden Greats.

Releasing the book, film producer and music promoter Amarjit Singh Kohli,
said that Mohammad Rafi remains till today the most versatile of all the
singers who could sing any type of song. Such versatile geniuses are born
in a millennium. Every singer has some idol and Rafi has perhaps the
biggest following amongst budding singers. He said that Vinod Viplav has
been doing marvellous job and he had earlier penned the legendary singer’s
first biography titled ‘Meri Awaz Suno,’

Music Organiser and presenter Mr. Kaushik Kothari said that probably
because of the miraculous blend of all the singing qualities that he
possessed with that humility and godliness that he conveyed and expressed
silently and so naturally during his lifetime. A man of few words, he was a
great human being and a singer that made him the greatest legend of all
time. This new book, edited by Vinod Viplav tells the different shades of
his personalities and his fan followings.