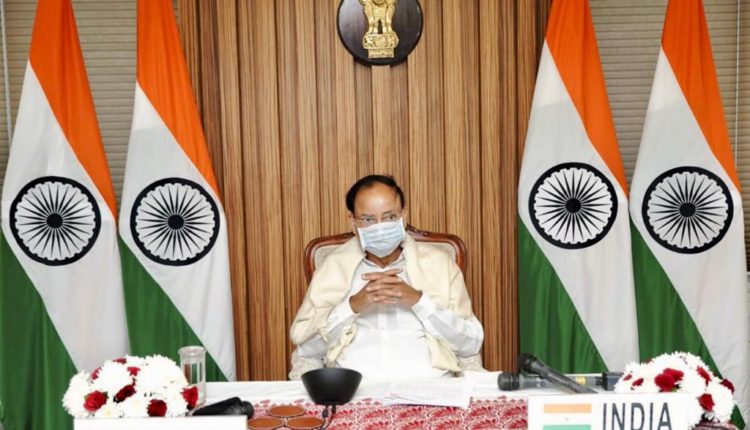 New Delhi (25/01/2022): Vice President of India M. Venkaiah Naidu today urged the Election Commission and the citizens to ensure a voter turnout of 75% in the next general elections to make electoral democracy more inclusive and also sought consensus on simultaneous polls to sustain the tempo of development.

In a message on the occasion of the 12th National Voters Day today, Naidu stressed that no voter should be left behind and urged the citizens to judge the contestants in the elections on merit. As Naidu is in home isolation in Hyderabad after testing corona positive, his address was read out at the event in New Delhi.

Referring to the increase in voter turnout from 44.87% in the first general elections to Lok Sabha during 1951-52 to the highest ever 67.40% for the 17th Lok Sabha in 2019, marking an increase of 50% in voting, Naidu complimented all stakeholders for the same. Alluding to the sustained efforts of the Election  Commission of India in this regard striving for excellence during the 70 years of the country’s electoral journey, Naidu hailed the Commission as a  credible, responsive and forward looking institution every votary of democracy can legitimately be proud of.

Naidu noted that the challenge before the Election Commission is to ensure a steady increase in voting in every election to make our electoral democracy more inclusive by addressing the barriers to voter participation.

The Vice President urged: “In the 75th year of our Independence, let us resolve to leave no voter behind and aim to increase the voter turnout to at least 75% in the next general elections. Let each one realize that vote is not only a right but a responsibility. We, as a nation, must think and arrive at a consensus to have simultaneous polls to all the three tiers of federal set up and move towards better governance by focusing our attention on all round development of our people”.

Naidu referred to the substantial 8% increase in voter turnout from 58.21% in 2009 general elections to 66.44% in 2014, suggesting that it is feasible to reach 75%  voter turnout target from 67.40% in 2019. He complimented the SVEEP(Systematic Voter Education and Electoral Participation) initiative of the Election Commission launched in 2009 for improving voter participation.

Naidu expressed delight over women voting more than men in the 2019 general elections by a margin of 0.17%, for the first time in 70 years, ending the gender gap in the country. (In 1962  general elections, men voter turnout was 16.71% more than that of  women)

Naidu stressed on the need for more swift resolution of election disputes and creation of a more informed citizenry empowered to judge the merits of each candidate in the elections. He urged the Commission to further explore innovative ways in which technology can enhance the credibility and accessibility of the voting process. He also referred to high voter turnout in the range of 74% to 84% in the elections to five State Assembly held under covid protocol last year.

The 12th National Voters Day is being organized on the theme “Making our Elections Inclusive, Accessible and Participative”. January 25th is being so celebrated as the Election Commission was set up on January 25, 1950, a day before the country became a Republic with the Constitution coming into force from January 26, 1950.