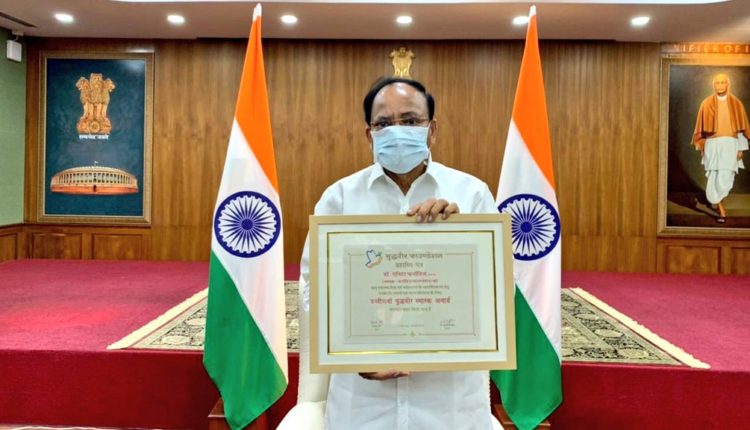 The Vice President, M Venkaiah Naidu today called for according highest priority to the health needs of women, who constitute nearly 50 per cent of the country’s population.

Presenting the ‘Yudhvir Memorial Award’ through a video conference to Hyderabad-based gynecologist, Dr. Evita Fernandez in recognition of her service for the cause of women’s healthcare and empowerment, he said “We will not be able to create a healthy society if the health needs of women get neglected”.

He said that various health interventions must focus on bolstering and meeting women’s health needs since they form the bedrock of a healthy society.

While noting that considerable progress has been made in reducing the maternal mortality ratio in the country, the Vice President stressed the need to accelerate the decline to achieve the target 3.1 of Sustainable Development Goals (SDGs) set by the United Nations that aims to reduce the global maternal mortality ratio by less than 70 per 100,000 live births by 2030.

Naidu also called for concerted efforts to address the problem of under-nutrition among women in India.

Lauding the awardee, Dr. Evita Fernandez, for her pioneering work in women’s health and reproduction, he noted that she is a strong votary of women’s empowerment and normal birthing. “I am happy to note that Dr. Evita leaves no stone unturned to make childbirth a natural and positive experience for women, promoting normal birth and reducing Caesarean sections”, he added.

Referring to the efforts of the Telangana Government and the Fernandez Hospital along with UNICEF to reduce Caesarean Sections and increase normal births in public hospitals, the Vice President described it as a “laudable objective” and wanted more private hospitals to join in the drive to reduce C sections.

Naidu said that improving maternal health care was of crucial importance and commended Dr. Evita’s initiative to create a national cadre of midwives. He also expressed his happiness that the Fernandez Foundation was committed to train 1500 nurses in midwifery for Telangana Government.

The Vice President also paid rich tributes to late Yudhvirji, in whose name the award is instituted. He said that he was a man of many parts– a freedom fighter, social worker and a reputed journalist. As a torchbearer of truth and honesty, Yudhvirji practiced ethical journalism. He launched Milap Daily first in Urdu and later in the Hindi language in 1950. He said that Hindi Milap has evolved into an institution of repute, synonymous with ethical and dispassionate news coverage. It has become an integral part of Hindi speaking readers in Hyderabad and southern India.

Government of India to provide Rs 15,000 crore to States for Capital Expenditure