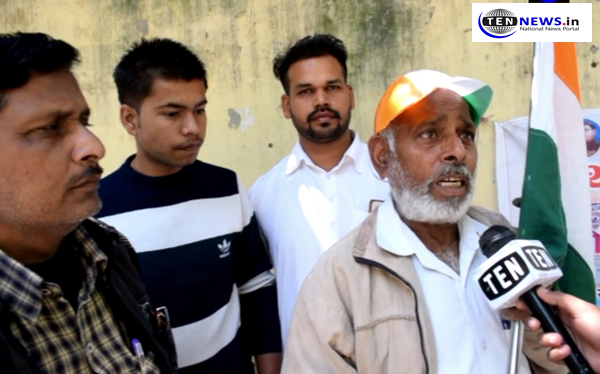 New Delhi: (18/03/2019) After the deadliest Pulwama attack which left the nation in grief and forced them to went out on the streets in demand of a strict action against Pakistan for breeding terrorists on their land, even after the airstrikes in Balakot, which had satisfied the country loving people, there are some of them who still wants a strong revenge.

Among them, one of the person is Vinod Raghuvanshi, who wants to host the Indian flag Pakistani soil, as he believes, it is the best revenge against the country of cowards who plants timid attacks in India.

Raghuvanshi, a former journalist with a white beard assumed to be in her sixties, on March 5, started his journey from his home town Bareilly to make his country proud, on foot he started walking towards his destination, it took him two weeks to reach New Delhi. The National Capital is around 300 kms away from his hometown, which he covered on foot.

During his journey to New Delhi, people motivated him through raising slogans like “All hail to motherland” and also praised him for his patriotic ideology.

Today, Ten News spoke to him in New Delhi, the energetic old man — who has two sons, both were working as a manager in banking sector– said, “I am on the last stage of my life, before saying goodbye to my motherland, I want to do something for motherland, the Pulwama terror attack highly saddened, I am staying in Delhi for a day then I will move for Pulwama, where I will greet my condolences to our brave martyrs, then I will try to reach Pakistan where I will host my tri-color, no matter if I will taste death”.

People like “Vinod Raghuvanhi” who is dedicated to the country with all they have is a source of inspiration for our country.