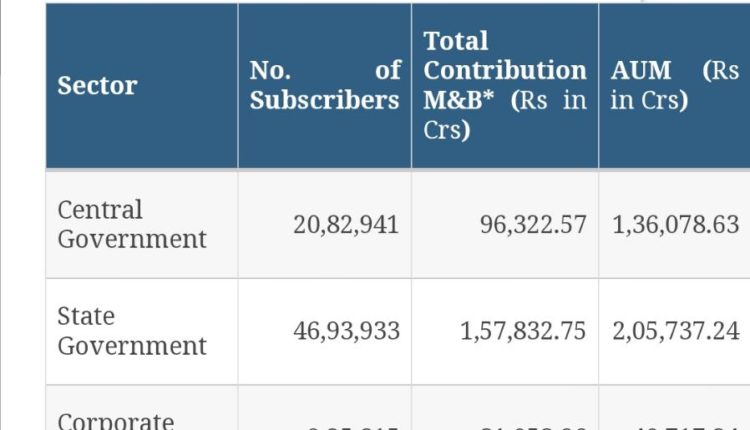 Why not an ordinance for 1.70 lakh crore in Corona Pandemic says Patel.

In central and state governments since 2004 a share market based pension system NPS for govt employees was implemented through an ordinance to reduce the increasing burden of pension budget. In new pension scheme (NPS) system an employee is bound to Deduct his 10% salary every month till retirement, the govt also match the same amount and the total corpus (20%) is invested in LIC,SBI and UTI in approximately same ratio.
Manjeet Singh Patel, national media secretary of NMOPS-organisation of NPS employees says since April 2019 govt gas increased his contribution to 14% in place of 10%. By which today more than 3.40 lakh crore rupees are deposited in national securities depository limited (NSDL) in which more than 1.36 lakh crores are belonging to central government employees and remaining 2.04 lakh crores to various state governments.

For many years this system is being criticised by many govt associations and so many huge protests and strikes have been made by various unions to restore guaranteed older pension system for old age social economical security. In this sequence Delhi, Andhra Pradesh and Punjab govt has constituted committies to scrap NPS.
Now a days in Corona Pandemic central as well as state governments are suffering from economic crises and searching different ways to resolve this issue.

In these diverse conditions through an ordinance central govt can transfer half of the employee’s contributory provident fund which is approx- 1.36 lakh crores in its treasure by declaring it as General Provident Fund (GPF). This may be a great relief fund in corona pandemic to central govt as well as for 20 lakh central govt employees who are demanding this for a long time. This may be a boon to 67 lakh govt employees who are still serving the nation in these worse conditions. State governments will be able to achieve half of the 2.04 lakh crores funds, who are looking towards central government. After April 20 relaxation in lockdown in areas with no hotspots, says PM Modi

Meet Ruhi Hak, an NRI, uplifting women, children across the globe through education,…