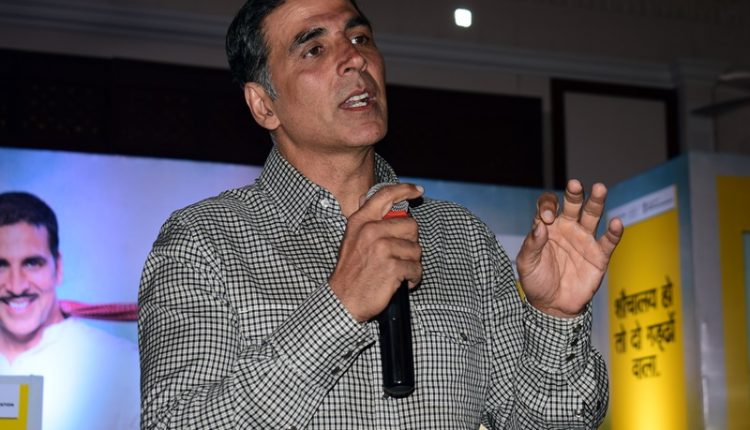 Eminent actor and Bollywoods inconic superstar Akshay Kumar, yesterday launched an advertisement campaign for the Swachh Bharat Mission (Grameen) in the capital. The campaign was launched at a Collectors Convention for Toilet Technology organized in the capital.

The campaign focuses on promoting the twin pit toilet technology in rural India, and also features actress Bhumi Pednekar along with Akshay Kumar.

In his welcome address Parameswaran Iyer, Secretary, Ministry of Drinking Water and Sanitation, spoke about the contribution made by Akshay Kumar to the Swachh Bharat Mission.

He said that right from his movie, Toilet Ek Prem Katha, which was seen and appreciated by rural and urban people across the country, to his participation in the twin pit toilet advertisement campaign for the Swachh Bharat Mission, Akshay has been a strong supporter of the sanitation movement underway in the country

Akshay Kumar interacted with Swachh Bharat Mission officials, district collectors, communication experts and members from the media on the occasion. During his interaction, he spoke about the need for influencers of society to talk freely about toilets, and empty toilet pits around the country to destigmatize cleaning of one’s own toilet by members of the family itself.

The District Collectors and field officials, during the interaction, spoke about the power of women in leading the sanitation mission in rural areas, and the role played by the movie, “Toilet Ek Prem Katha” in leading this behavior change. It was also announced by the Ministry of Drinking Water and Sanitation on this occasion that the producers of Toilet Ek Prem Katha have given rights to all State and district teams of the Swachh Bharat Mission (Grameen) to screen the movie in villages on a non-commercial basis.

1. A pit in a standard twin-pit toilet model fills up in roughly 5 years for a 6-membered family

2. The waste may then be easily re-directed to the second pit

3. In 6 months to 1 year, the waste in the filled pit decomposes completely

4. This decomposed waste is safe to handle and rich in NPK (nitrogen, phosphorus, potassium) nutrients which makes it ideal for use in agriculture

The States are continuously encouraged by the Swachh Bharat Mission (Grameen) to include awareness generation about the above facts as part of their grassroots information, education and communication (IEC) efforts.

The advertisement campaign launched today is an effort, supported by the World Bank, towards encouraging this technology using mass media. The film can be found on the YouTube channel of the Swachh Bharat Mission (Grameen) (link: tinyurl.com/sbmgramin). It will be translated in several regional languages, and the Hindi version will start airing on television channels with immediate effect