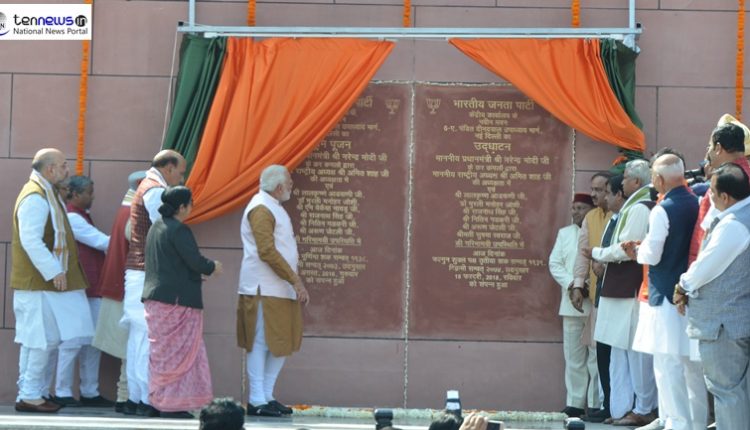 New Delhi: Now, every Bhartiya Janta Party (BJP) workers can claim that they have a home at Deen Dayal Upadhyay Road in Delhi said Prime Minister Narendra Modi while unveiling the curtain of BJP headquarter here on Sunday afternoon.
“I congratulate all the party workers who tirelessly worked to complete such a great building in just 14 months,” said PM Modi to the gathering adding that ours was a journey that began with greats such as Dr Shyama Prasad Mookerjee and Pandit Deendayal Upadhyaya. Generations of Karyakartas have given their life for the party. Ours is a party committed to Rashtra Bhakt (Nationalism).
The premises has three buildings fitted with modern communication tools, enabling pary office-bearers to co-ordinate official works with their counterparts in the state and local levels in real time.

BJP chief Amit Shah, former party presidents L K Advani and Murli Manohar Joshi were present during the inauguration ceremony. Also in attendance were a host of Union ministers, including Home Minister Rajnath Sing, Minister for External Affairs Sushma Swaraj and Transport Minister Nitin Gadkari.
Following the event, BJP Chief Amit Shah claimed that as per my best knowledge this will be the biggest office of any political party in the world which is spread in around 1.70,000 square feet, equipped with all hi-tech facilities and eco-friendly.

The new party office is located at 6A, Deen Dayal Upadhyay Marg and will make the BJP the first major national party to shift its office outside Lutyens’ Bungalow Zone, following a Supreme Court directive that party offices should be relocated from there.
On August 18, 2016, Modi and Shah had laid the foundation stone of the new headquarters and a Mumbai-based architecture company had designed it.
The BJP has planned to move the new office from the current one as early as next week.