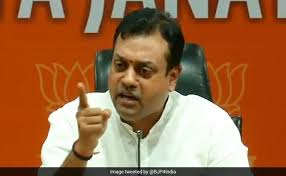 New Delhi: After Senior Congress leader Ghulam Nabi Azad stated that the number of Hindu candidates inviting him to campaign for them has reduced.BJP Spokesperson Sambit Patra Slamming Congress and Ghulam Nabi Azad said,
It’s Yet another attempt by the Congress to malign the Hindus. Hindu-Terrorists,Hindu-Pakistan,Hindu-Taliban,Bad-Hindus want temple and now this.

“Congress is running a Modi hatao campaign in Pakistan against our country. This is not the first time. Sidhu was speaking about South India comparing it with Pakistan.”

NEP sets the vision of developing an equitable and vibrant knowledge society:…