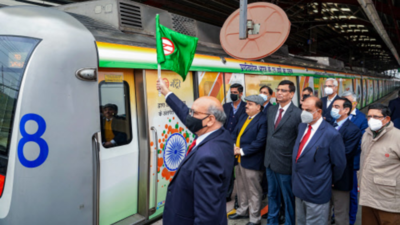 The train was launched in the presence of Dr. Mangu Singh, MD, DMRC & other senior officials at Yamuna Bank Metro Station on Tuesday.

According to DMRC, The exterior of this eight-coach special train has been exclusively wrapped & decorated with collage of photographs & slogans depicting India’s glorious history.

Further, the DMRC also informed that from time to time, online and on-ground activities like Cyclothon, children workshop, quiz and drawing competitions etc are also being organised by DMRC to create awareness regarding the use of public transport, non-motorised transport, environmental benefits and also revisiting the history of independent India through such activities.

Moreover, The train has been symbolically launched on the occasion of Republic Day Celebrations to spread the idea of nationalism and unity amongst the general public. This special train will continue to remain in service throughout the commemorative period of ‘AzadiKaAmritMahotsav’,”

Mandaviya holds meeting with nine States/UTs over Covid situation; asks them to revamp testing where it’s down