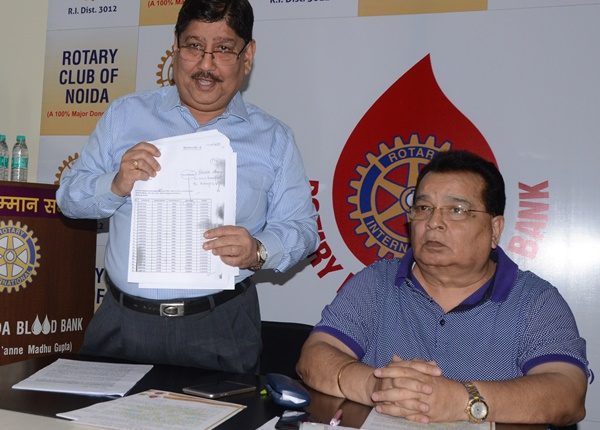 Jolted by the recent scandal at Rotary Blood Bank Trust Noida, it’s trustees and office bearers today called for a press conference to explain their side of story and how were anomalies of this scale allowed to happen during such long period.

Explaining their stance Rotarian Sudhir Walia, President Governing Council said, “We are extremely disheartened and shocked with the kind of revelations that have come forward regarding the conduct of former managing trustee Satish Singhal. On the onset we wish to make it clear that the said individual was the most significant force behind establishment and exceptional scaling of this blood bank for these years. We all trustees had utmost faith in him and he single handedly ran the operations of this blood bank for all these years. We confess that our trust has been broken and there could not be a more sadder moment for all of us associated with this blood bank”.

Talking about the nature of theft and irregularities which have taken place at blood bank, Mr Walia said, “We wish to clarify that speculations of smuggling or misuse of donated blood are being misinterpreted. The actual issue is that all the blood that was donated was rightly treated, examined, stored and transported to other blood banks as per Government norms. We are sure that the blood from these blood banks in Kanpur or Gorakhpur have also been put to use of needy, given the nature of this product. Hence this is a complete misconception that blood donated by large number of our esteemed donors has gone waste. The issue for which we had made complaint is that although the blood was transferred to other blood banks but the payments that should have come to Rotary Trust Blood Bank Noida coffers didn’t reach here and hence couldn’t be utilised for other charitable purposes. So we have filed an FIR against Satish Singhal for stealing 7000 units of blood as money generated by it didn’t reach the charitable trust”.

Managing Trustee Sudhir Kumar Media added, “It was during a general body meeting in October 2017 that we realised that something was amiss. Hence an enquiry was initiated following which Satish Singhal resigned from his post. Two CA’s from outside were given the task of audit and large number of financial irregularities came to light following which FIR has been registered”.

Governing council President Sudhir Walia also informed about various level of checks that have been placed now to never allow a repeat of such act. He also said that various staff has also been changed after the incident.

Large number of trustees of Rotary Noida Blood Bank were present during  the interaction. The Rotary Noida Blood Bank Trust also reiterated it’s commitment to keep serving the poor and needy and to continue with its charitable activities with rennewd resolve and grit. The shaken trust of donors although remains a matter of concern.