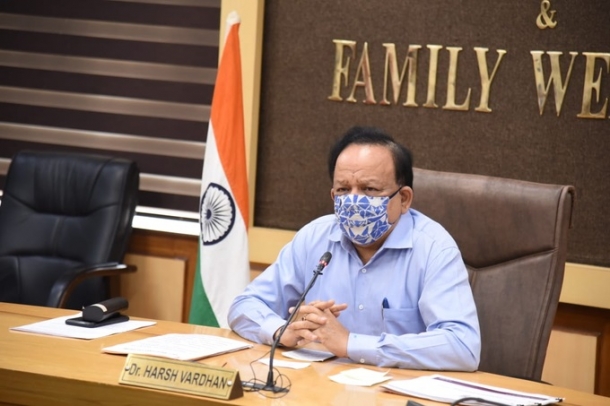 At the outset, Dr. Harsh Vardhan expressed deep gratitude and offered salutations to all the COVID warriors who have been steadfastly fighting against the pandemic since many months. He continued toinform his colleagues of the sturdy public health response mounted by India in its fight against the pandemic and the encouraging results so far.“With 62,27,295 recovered cases, India has the highest recovery rate of 86.78% in the world.  Fatality Rate of 1.53% is the lowest in the world and we are reporting the three-days Doubling Time has been successfully raised to 74.9 days.” “A total of 1927 labs at present have led to an upsurge in testing. India’s testing capacity has been hiked to 1.5 million tests per day. Close to11 lakh samples were tested in the last 24 hours,” he added.

The Union Health Minister and Chairperson of the GOM reiterated his concern and appeal to everyone regarding observance of COVID appropriate behaviour during the forthcoming festival season and the winter months, when the likelihood of an increase in the disease is high. “The Hon. Prime Minister has launched the countrywide Jan Andolan to encourage people to adopt and encourage COVID appropriate behaviours to curb spread of the diseases while celebrating the festivals”, he stated.

Dr. Sujeet K Singh, Director (NCDC) presented a detailed report on how the data driven graded government policies have helped India achieve a significant control over the pandemic.He showed figures related to number of cases, number of deaths, their growth rate and how they compared favourably to the world due to the aforesaid policy interventions. While the overall recovery rate for India is 86.36%, he informed that Dadar and Nagar Haveli and Daman and Diu have the highest recovery rate of 96.25% in India followed by A&N Islands (93.98%) and Bihar(93.89%). Kerala has the lowest recovery rate of 66.31% because of the huge surge in number of cases in the recent days.

Pointing out the pattern of Influenza and Vector-Borne Diseases which peak during this season, he notedwith concern the less reporting of cases of Influenza due to the COVID-19 pandemic across the country. He also apprised the ministers of the advisories issued for improving the testing and surveillance activities for Seasonal Influenza to simultaneously detect it with COVID-19 in view of the upcoming influenza season in the country.

Reiterating Dr. Harsh Vardhan’s concern on the fresh challenge to the containment efforts in view of the upcoming winters and festive season, he stressed on the gradual transition to mitigation in affected cities over the next few weeks and a sustained campaign to instil COVID appropriate behaviouramong the people.

Through a detailed presentation, Dr. Vinod K Paul, NITI Aayog apprised the GoM of the process of COVID vaccine development in India and around the world. He presented a comprehensive study on the priority sections of the population that would have initial access to the vaccine drawing upon recommendations of Centre for Disease Control (CDC), USA and the WHO. He also presented an age-group wise gender composition of COVID death, the percent composition of the vulnerable age-groups in the Indian population and the overlap of known COVID co-morbidities amongst these age-groups.

The eVIN network which can track the latest vaccine stock position, temperature at storage facility, geo-tag Health Centres, and maintain facility level dashboard is being repurposed for the delivery of COVID Vaccine. He apprised everyone present that the listing ofHealthcare Workers (HCWs)would be complete by the end of October or early November while the task of identifying frontline workers, recalibration of digital platform, logistics of non-vaccine supplies, cold chain augmentation are being carried out as per the detailed implementation plan.

Union Health Secretary Sh. Rajesh Bhushan noted the importance of keeping up aggressive testing to keep the positivity rate below 5%, the countrywide mortality rate below 1% and the deepening and strengthening of COVID appropriate behaviour among the general population. He also cautioned the need to observe the trajectory of the disease in key states of Kerala, Karnataka, West Bengal, Rajasthan and Chhattisgarh which have recently exhibited a surge in cases.