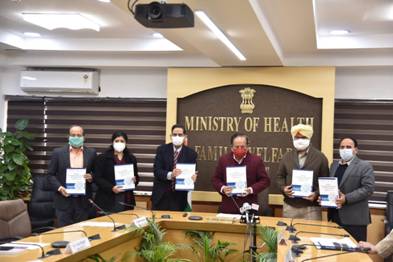 Dr. Harsh Vardhan, Union Health Minister of Family Welfare today presided over the foundation day celebrations and launch of the decadal year of the Indian Council of Medial Research – National Centre for Disease Informatics and Research (ICMR-NCDIR), Bengaluru through a video conference.

The Union Health Minister also released results from the largest comprehensive national survey on risk factors and health systems preparedness of Non-communicable Diseases (NCD) along with the framework on use of telemedicine for cancer, diabetes, heart diseases and stroke.

At the outset, Dr. Harsh Vardhan shared his deep gratitude on behalf of the whole country to the scientists of ICMR for their immeasurable contribution in controlling the pandemic. He said, “The year 2020 brings back memories of gloom due to COVID. Yet, it has also sowed Hope. It was also the year of Science and Scientists. They not only eased the pressure on testing kits by developing indigenous kits but reversed the position completely with indigenous testing kits now being exported worldwide. ICMR was one of the first organizations worldwide to have isolated the virus as well as the mutant strain and has contributed in creating a biorepository of potential drug targets.” “India is now producing and supplying vaccines to many countries out of which one is developed indigenously in entirety; the entire scientific community should be credited for the achievement,” he added.

Expressing his elation at the release of theNational Non-communicable Disease Monitoring Survey (NNMS)across India which also tracks cancer, he said, “The National Cancer Registry Program is a very valuable cancer surveillance tool for the country. Actions to tackle cancers benefit a lot from good and reliable data monitoring. This can help in targeted screening of uncommon cancers through mass NCD screening at Ayushman Bharat HWCs”. He further asked Secretary (Health Research) to explore legislative actions on making reporting of all forms of cancer mandatory for better health outcomes.

The Minister was apprised on the key findings and attributes of the study.(NNMS) was conducted during the period of 2017 – 18. The purpose of the survey was to collect reliable baseline data on key indicators (risk factors, select NCDs and health systems response) related to the National NCD monitoring framework and NCD Action Plan. This is the first of its kind of a comprehensive survey on NCDs using standardised tools and methods, covering the age groups of 15-69 years, males and females residing in urban and rural areas of the country.The survey covered a national sample of 600 primary sampling units from 348 districts in 28 States in collaboration with eleven reputed institutions across the country.

The results show that, one in every three adults and more than one-fourth proportion of men used any form of tobacco and consumed alcohol in past 12 months respectively; average daily intake of salt was 8gms; more than two in five adults and one in four adolescents were doing insufficient physical activity; more than one in every four adults and 6.2% adolescents were overweight or obese; almost three out of ten adults had raised blood pressure and 9.3% had raised blood glucose; two in five adults had three or more risk factors for NCDs. The status of health system in responding to the NCD burden was also underscored.

Dr. Harsh Vardhan noted, “The survey was undertaken to provide baseline information on NCD risk factors and it highlights the need to improve comprehensive multi-sectoral approaches focussed on both prevention and management of NCDs. Regular surveillance of NCDs is critical to monitor the trends and to guide the interventions.”

He also released the Framework for Telemedicine use in Management of Cancer, Diabetes, Cardiovascular Disease and Stroke in Indiaand said, “Telemedicine with its components of tele-consultation, tele-monitoring, tele-triage can be integrated to build continuum of care model for major NCDs. The increasing burden of NCDs in India requires multipronged interventions that can address promotive, preventive, curative, rehabilitative aspects of NCD care and management. Telemedicine can bridge and link all these aspects. It can be adapted and used by medical practitioners from primary to tertiary health care level in India, through the national teleconsultation network and other similar platforms.” He added that this will also encourage remote healthcare and minimize inconvenience to patients to travel to hospitals.

Dr. Harsh Vardhan also highlighted the need for stronger collaborative efforts: “AIIMS Jhajjar has become a centre for excellent Cancer Care. Co-operation between health practitioners and researchers is the way forward and the mode of video-conferences, which has surfaced in the times of COVID, should be utilized to the maximum.”

The Union Health Minister ended the meeting on a note of caution. “A WHO survey some years back found that 45% of NCDs are a result of physical inactivity. The Fit India Movement has gained significant momentum in generating awareness regarding this which needs to be further amplified. More gyms and exercise centers will invariably lessen the need for hospital infrastructure.”

Correctional Service Medals on prison personnel on the occasion of Republic Day, 2021