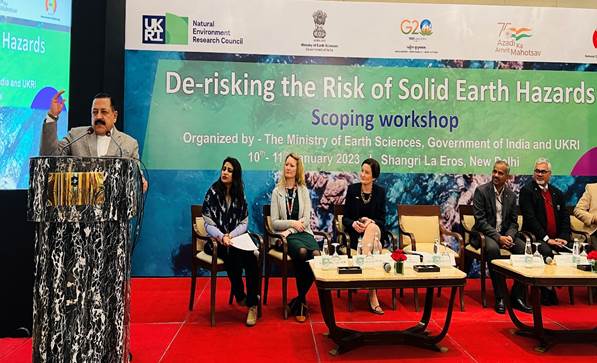 Dr Jitendra Singh made these remarks at the Joint Indo-UK Academic Workshop in Delhi, where the UK Delegation was led by Christina Scott, British Deputy High Commissioner to India at the British High Commission in New Delhi.

It is a providential coincidence, said Dr Jitendra Singh that the Joint Geoscience Workshop on “Earth Hazards” is happening at a time when India is dealing with Joshimath incident in Uttarakhand, where the Ministry of Earth Sciences is involved in addressing the issue along with other agencies.

Dr Jitendra Singh said, taking a cue from Prime Minister Narendra Modi, the Ministry of Earth Sciences has adopted Pro-active stance and established 37 New Seismological Centers (Observatories) in the last two years and now India has 152 such centers for extensive observation facilities generating huge data base for outcome-oriented analytics. He informed that in next 5 years, 100 more such seismological centers will be opened across the country for improving the real time data monitoring and data collection. India is moving closer to playing a critical role in seismological advancement and understanding, the Minister added.

Dr Jitendra Singh underlined that there is a critical need for fundamental research on the physical processes that lead to failure of the brittle layers beneath the crust and sub-crust, to develop low-cost solutions to identify and quantify the geo-hazards over the vast regions and devise mitigation strategies that are appropriate to widely varying – and rapidly evolving – political, social, and economic contexts. He also added that scientific understanding of the processes behind disasters has grown immensely over the past 50 years, and there is need for strengthening further international collaborations like the Indo-UK initiative to fight such disasters in future.

The Minister underlined that deep collaboration of Indian scientists with UKRI counterpart on Solid Earth Hazards will enrich our understanding to further develop a way out for mitigating the risk associated with natural disasters like earthquakes, landslides, and tsunami, etc.

Dr Jitendra Singh thanked the British High Commissioner for the Joint Workshop and remarked that such academic engagements in India would foster new enthusiasm in young researchers and enable them to forge collaborations and construct multi-disciplinary science proposals, the outcomes of which will help us to move into the future with better understanding of our planet, armed with new scientific solutions. The Minister further added that with the growing consciousness of the interconnected physics behind the Earth processes and its interior dynamics, scientists are enthusiastically pushing frontiers of joint research in different spheres of Earth sciences.

Christina Scott in her remarks said that building resilience to geo-hazards presents a major challenge that requires collaborative international action by researchers, policymakers, governments, private sectors, and civil societies. She said, in this context, the UK earth scientists may significantly contribute in current understanding of tectonic activity and its relation to geo-hazards in India. The outcome of the workshop will lead to specific scientific problems much relevant to society that would jointly be studied with UK counterpart to understand the challenges faced by India, Scott added.

Dr M. Ravichandra said that this joint workshop is a fitting environment for both the countries to shake hand and forward research in their niche as well as pursue new avenues of multi-disciplinary investigations. He said, it will indeed provide an opportunity to the experts/academicians from India and UK to come together and discuss the critical need for fundamental research in different aspects of Solid Earth Hazards for the Indian region.

Wendy Matcham, Head of Resilient Environment, Natural Environment Research Council (NERC), UK Research and Innovation (UKRI) said in her remarks that the aim of this workshop is to scope the potential areas of focus of research between UK and India. She said, it would be noteworthy to mention that UKRI has already engaged them in a similar kind of collaboration on activities of MoES related to atmospheric science and hydrological science.

During the two days’ workshop experts/scientists from both the countries shall have deliberations on different aspects of the solid earth hazards. The identified potential areas of focus for this programme of research may include, but are not limited to- Physics of rock failure: Earthquakes, Landslides, combining data sets from laboratory, remote-sensing, and field observations; the development of Earth Observation and AI techniques to identify geo-hazards, map vulnerabilities, explore mitigation strategies, and guide responses to disasters; Sensor technologies for dense monitoring of crustal deformation; Improved quantification of hazards and risks; Dynamic scenarios – guiding long-term development of cities and regions in response to geo-hazards; Hazard potential of tsunami-genic zones; Study of ionospheric disturbance by studying TEC using GPS and Study of focal mechanism using real time GPS &SMA data.

The history of instrumental earthquake monitoring in India dates back to 1898 when the first seismological observatory of the country was established at Alipore (Calcutta) on 1 December, 1898 after the 1897 great Shillong plateau earthquake of magnitude of 8.7, the deadliest and the highest magnitude earthquake in the history of Indian earthquakes so far recorded till date.

National Centre for Seismology under Ministry of Earth Sciences is the nodal agency of Government of India (GoI), for monitoring earthquakes in and around the country. For this purpose, NCS maintains a National Seismological Network (NSN) consisting of 152 observatories spread across the country. The information of earthquakes reported by NCS is being disseminated to the concerned central and state disaster authorities in least possible time to initiate the adequate mitigation measures.