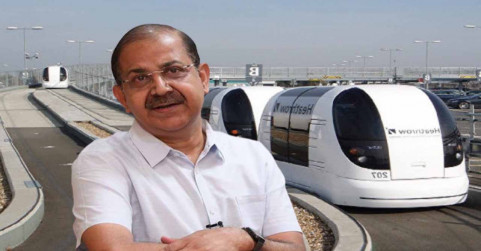 Greater Noida :  Uttar Pradesh government is all set to introduce driverless pod taxis to enhance the connectivity on 35 km stretch between Greater Noida and Noida International Airport located in Jewar. In many western countries, pod taxies are a popular and affordable means of transport for intercity travel. A pod taxi can accommodate four to six people at a time.

The Yamuna Expressway and Eastern Peripheral Expressway will soon sign an agreement with Delhi Metro Rail Corporation (DMRC) to extend the connectivity to upcoming Yamuna City and remote areas of the region. “We already have Metro connectivity till Greater Noida but Jewar is about 35 kilometres from Greater Noida city. To bridge this gap, pod taxis are being considered. Pod taxis are a revolutionary mode of transport widely being used in many western countries,” said Dhirendra Singh, BJP MLA from Jewar.

Earlier YEIDA had planned to operate this pod taxi service on 5.5 km track between Film City to Noida International Airport. But now, the YEIDA plans to operate this service on a 35 km track starting from Greater Noida’s Pari Chowk to the NIA. The project will cost around 2000 crores as per initial studies. If this project is completed, it will ease the traffic congestion on roads and will be helpful in curbing pollution in NCR region.