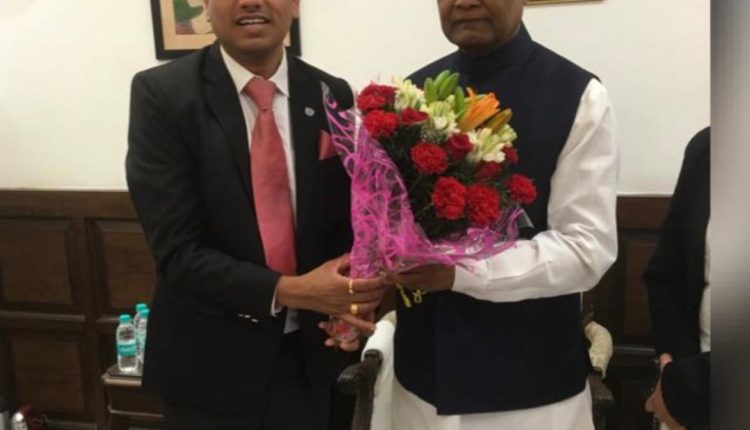 Millions of people across the globe pursue Ph.D. in various fields to gain expertise in their respective subjects. In the field of law, LLD degree is received by those who have a specialisation in the law. This degree is granted with the consensus of the official executive council of the University, which consists of renowned scholars of different subjects of that University in India.

It is with immense pride that we inform you that Dy. Advocate General Manoj Gorkela is being given this Honorary Degree because of his great achievements, which themselves are a result of great hardwork.

Mr Gorkela started his journey from a frontier district of India. Due to the sad demise of his father in his childhood, and being the eldest son of his family, he has had to carry out family responsibilities from a very young age.

He has given lectures on many subjects such as International Law, Indian Constitution, in many Universities across the world, and in countries like Canada, the United Kingdom, the United States, and many universities in India. Apart from this, he has also given lectures to Doctors and professors on Medical Jurisprudence in India’s most prestigious medical college (AIIMS) and he has also taught CBI judges at National Judicial Academy, Bhopal.

He has also given lectures on legal awareness and knowledge of the Indian Constitution to thousands of army soldiers and officers of BSF, CRPF, ITBP, SSB, Forest Department, and Police Department in their

Refresher courses. His kind personality and generosity was reflected when he charged only one Indian rupee for the same.  Along with being Deputy Advocate General at Supreme Court You are representing three states in the Supreme Court. You have brought about some much required legal developments in the Indian legal system by being part of the landmark cases such as Ram temple in Ayodhya, Cryptocurrency, land acquisition, poor children in private schools, mid-day meal, Aadhaar card, new courts and judge’s appointments, etc.

Sir has represented pro-bono millions of tribal people of India in front of the Constitutional Bench in the Supreme Court of India, most of whom were underprivileged and ensure that justice was delivered to them. Sir is also the visiting professor at a University located in Madhya Pradesh. Sir has devoted his life up till now to the upliftment and welfare of the poor and the country’s progress.

For the sake of the development of country, sir visited to many countries across the world and studied the law thoroughly, by going to the International Court of Justice and UNO, so that he could share the knowledge imparted from abroad in India by delivering lectures. Sir happens to be the first person in India, by whom only one Indian rupee has been charged from the Government of Uttarakhand every month for the purpose of serving the Country. Sir has achieved so much at a young age and that has been considered by the Karnatak University and his Excellency the Chancellor. Sir’s list of achievements is never-ending and beyond words. Rarest of the rare people have such achievements in India and yet sir is down to earth to live like an ordinary person.

The name of the University awarding the Degree is always of great importance and Mr. Gorkela is getting the LL.D. Degree from a University which is not only renowned in the state of Karnataka but also a renowned university in India (Karnatak University), this university was built before independence and its campus is spread over 850 acres.

Mr Gorkela deliberately did not pursue Ph.D. from any University because he was fully confident that he would be awarded this honorary degree which is given to a very few selected people.

All the members of the Gorkela Law Office, associates, interns, and office staff would like to congratulate you on this excellent achievement. We feel very happy for you as you are awarded this Honorary Degree. Heartfelt Congratulations as you become Dr. Manoj Gorkela from Mr Manoj Gorkela.

Massive protest at Jama Masjid over alleged remark against Prophet