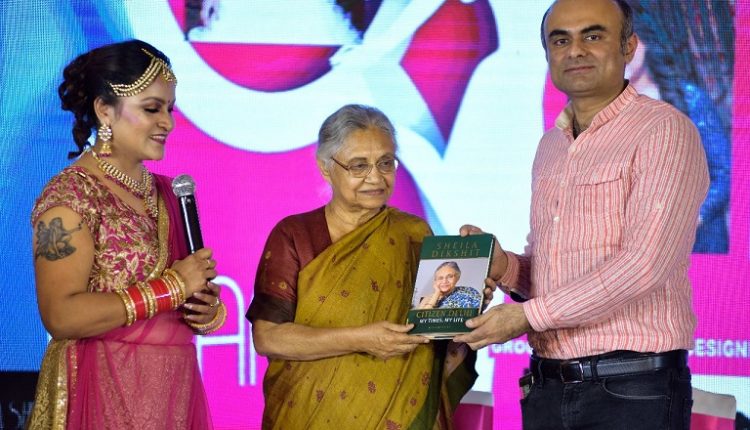 Entrepreneur Shalu Jain, Founder and Director of Tia Jewels & Sarees hosted yet another rollicking event, and the venue this time was Vivanta by Taj, New Delhi. Shalu chose the date 8th March specifically since the day is celebrated the world over as “International Women’s Day”.

The theme of the event quite naturally revolved around accomplishments of women, and the felicitation of women achievers by the Chief Guest of the evening, Shiela Dikshit, the former Chief Minister of Delhi.

Chhaya Raj Mittal as the Anchor of the evening was at her brilliant best, and in sync with Shalu and Dhiraj Jain, left no stone unturned in making the event truly ‘Iconic’.

The memorable event in fact, had all the components of an international stature not just because of the various elements that were showcased, but more so, because the event boasted of a good number of women participants who had achieved phenomenal success at the international level.

The event got off to an electrifying start when the hostess Shalu Jain presented a scintillating dance performance on the famous ‘Ghoomar’ number from Sanjay Leela Bhansali’s movie “Padmaavat”. The awestruck audience gave Shalu a standing ovation when she concluded her performance.

The Chief Guest of the evening Sheila Dikshit was given a rousing reception when she made her entry. Shalu and Dhiraj Jain welcomed her with a bouquet and a memento.

While hailing the milestones achieved during her stint as Delhi CM, Senior Journalist Bipin Sharma engaged Dikshit in an animated discussion on various issues concerning the city especially those pertaining to women.

Dikshit signed a copy of her book titled “Citizen Delhi- My Times, My Life” for the Anchor of the evening Chhaya, following which Bipin implored her to enlighten the audience on the salient aspects of her book. Dikshit graciously spoke on what inspired her to penning the book, and also shared the finer points of the book before proceeding with the presentation of the special awards to 35 women achievers from different avenues and industries.

Sharing more insights about her event, Shalu Jain said, “’Naari ke samman se Desh ka Maan’ is the slogan we must adopt in our lives. Country’s pride will be ensured only if the women folks are treated with utmost dignity. The need of the hour is to impart specialized vocational skill training in different fields to women so as to help them become financially independent. Need we say that financial independence holds the key to realizing the mission of “Women Empowerment”. This in turn, will play a key role in contributing towards “Nation Building”. Icons like Shahnaz Husain, Dr Kiran Bedi, Kiran Mazumdar Shaw, Hillary Clinton and Sheila Dikshit who broke new glass ceilings when they commenced their respective careers have indubitably set new lofty benchmarks for countless women all over the globe. As far as the incidents of crime against women go, it is a big cause of concern as that brings colossal ignominy to the nation on the whole. Be it the growing number of rape cases, the ill treatment meted out to foreign tourists, racist attacks against the North East girls, or the countless of sexual harassment incidents at work places, this only tarnishes the image of the country. Consequently, all this has an adverse impact on national level campaigns such as “Incredible India” and “Atithi Devo Bhavah”. The image of the country takes a beating not only when foreign nationals are shoddily treated, but also when misogynists unleash heinous crimes against their own people. The Uber cab rape case brought back the memories of the horrific Munirka gang rape incident of Nirbhaya that shamed the entire country. The time therefore, has come when the citizens need to work in sync for undertaking a steel pledge to ensure the safety and well being of women folk of not only their country, but also those who are visiting their country as tourists or students. Women safety deserves top most priority, and there is an urgent need to brainstorm on the practical steps which will ensure its reality. Under the flagship of my“Iconic series, I wish to initiate a string of exclusive programs at prominent places with the core aim of brainstorming on key measures needed for making women safety a ‘reality’ in the coming days. It is a now or never situation, and we will accept no further lapses. I truly feel overwhelmed with the euphoric response that my events have so far evoked. The key idea has been to honour all the women achievers who have made a marked difference to the society with their tireless and committed contribution in their respective fields. It would be incomplete to not make a mention of the divine blessings of Guruji that have been bestowed on me because of whom I could successfully host such a mega dimensional event.”

Under the professional guidance of ace Fashion Show Director Mridula Ranjan Khatri, a mesmerizing fashion show was presented by the women participants.

Albeit he couldn’t make it to the occasion, renowned Microsurgeon and Author Dr Anuj (recipient of the prestigious P. N. Wahi Gold Medal for Pathology and B. C. Roy Gold Medal for Medicine) had been invited as a Special “Guest of Honour”.

Expressing his gratitude, Dr Anuj said, “I feel overwhelmed to be chosen by Shalu Jain for this prestigious honour. Every new award and recognition inspires you to contribute more selflessly and holistically towards the society.

Sheila Dikshit has etched her names in the books of history for being the true champion and the protagonist of the Bhagidari movement in the capital. It aches to see the growing number of cases of crime against women especially rapes and molestation. Though imparting training to women in self-defence skills is a great idea, the problem will get addressed only if we create an army of volunteers all over the country so that a strong message is sent to the serial offenders and misogynists. Citizens need to get the concept of Bhagidari straight into their heads, and not shy away from shouldering their basic responsibilities. One should not forget that if they remain mute spectators in society, no one else will come to their aid in their crisis hour.”

“Icons & Crusaders” honoured at a grand Women’s Day event in the capital.