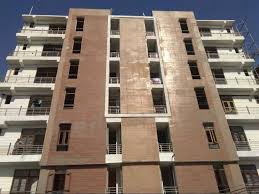 By tennews1 On Jul 22, 2018
0 735
Share
After the unfortunate incident in Shahberi Village of Greater Noida, Authority teams conducted an inspection of the village on Saturday. The team visited many high rises of the area and conducted checks to inspect quality of construction and its validity. While notice were issued to about 36 buildings, one building was also sealed with immediate effect.
The JP Heights building was found to be poorly constructed with no measures for rain water evacuation. The pillars of the building were cracked at different spots and a iron cover was erected by the builder to hide the cracks. The 7 storey building has 42 flats and two families were residing on the first floor. The basement was found filled by rain water. The cracks were also visible in the roof of the building. The inspecting team also noticed that the building was slightly bent in one direction.
Greater Noida Authority officials immediately directed the families to evacuate from the building and partially sealed it. The building was however completely sealed today morning after the families shifted away their belongings from the place.
Taking a strong measure in this regard, Greater Noida Authority has also issued notice to the JP Builders for demolition of the building. If the builder fails to demolish the building the demolition will be carried by the Greater Noida Authority. The building has been declared completely unfit for occupancy and will remain sealed until it is demolished.
The Shahberi village residents are under fear and suspicion after the tragic incident which killed 9 people. Many families have also started evacuating the village and are permanently moving out to other places.
0 735
Share FacebookTwitterGoogle+ReddItWhatsAppPinterestEmail

#Live: People in #Delhi Having a happy Sunday, #Visuals of Heavy Downpour in Dwarka!