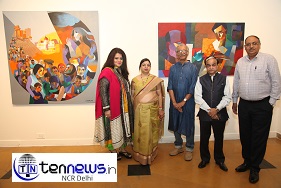 New Delhi: With a mission to approach art from a ‘global and multidisciplinary’ perspective, Art Curator, Anju Gupta in association with NGO ‘Routes to Roots’ launched her first ‘Groupum Art Gallery’ and inaugurated first series of Painting & Sculpture on ‘Eternal Peace’ at ‘Visual Art Gallery, Indian Habitat Centre on 6th May 2016.

Our motto is to promote the theme of “Eternal Peace” across the country via depicting contemporary and modern art work, said Anju Gupta. Further she said, through launch of Groupum Art Gallery we aims to showcase the work of artists from around the world. Groupum Art Gallery is set in Safdarjung Enclave, is a unique and flexible space, adaptable to a diverse range of exhibitions.

Routes 2 Roots an NGO engaged in people to people contact across the world through Culture, Art, Heritage and student exchange program, has collaborated with Groupum Art Gallery to give a platform to upcoming and renowned artists from India and around the globe, said Founder, Routes 2 Roots, Mr. Rakesh Gupta about association with Groupum Art Gallery,

‘Routes to Roots’ has been honoured with The Intercultural Innovation Award by the United Nations Alliance of Civilizations at the 7th Global Cultural Forum held in Baku, Azarbaijan.

The art work of Niren Sen Gupta is an assortment of works from his 40 years of artistic career where he has collated one of two works from every year on an average. The collection comprises his early works, paintings never seen by anyone and paintings he wanted to keep with himself like the collage and pen and ink drawing done in 1983 in the memory of his mother and different series done by him through his career like ‘Touch’, ‘Angel’, ‘Princess’ and ‘Moksha’ reflected it rather well.

While speaking about his art work, Veteran Artist, Prof Niren Sen Gupta said, Indian art essentially depicts the universe in all its abundance and multiplicity of life and form. It emphasizes the potential of an individual to grow spiritually. Every painting is related to something I experienced at that time,” says pointing at the ‘Angel’ series — dense pen and ink drawings depicting small innocent boys wearing poignant expressions. It was borne out of the trauma of 1971 partition. “I was born in what is now Bangladesh. I saw hordes and hordes of refugees at Sealdah and Howrah station which left me really disturbed. These refugees became angels in these works.”

However, other artist Prince Chand in his art work follows the logic of Indian aesthetic (Rasa, Bhava, Symmetry, Ornamentation, Philosophical, as well as the Indic image making techniques. His works are thus a convincing continuation of the forgoing vigorous art forms. After an intuitive as well as intellective grasping of the high points of temple art styles as of rock or cave patterns, he has sought to transform them into contemporary or modern forms. In this way he has utilized ancient motifs in fresh contemporary incarnation.

About Groupum Art Gallery : Our mission is to approach art from a ‘global and multidisciplinary’ perspective, Favoring avant-garde and edgy work, the gallery focuses on art that reflects modern culture and encourages public engagement. The gallery’s focus on critical and rigorous art drives its diverse program of exhibitions, film screenings, workshops, and panels. It represents a diverse group of artists from India and around the world, many of whom have been featured in art magazines, journals and newspapers. The Guild regularly publishes art catalogues and books, in addition to exhibiting work in its gallery space and at art fairs.