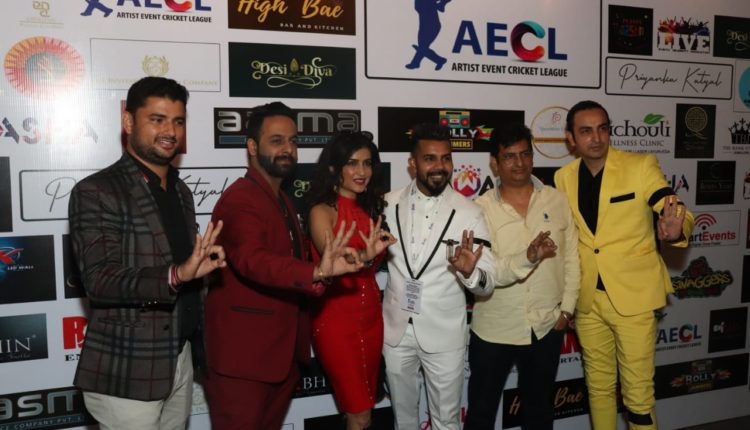 New Delhi : After the successful completion of IPL 2020, the fun is yet to continue for the cricket lovers. As the fans are eager to watch their favourite celebrities and artists, battling it out on the ground with bat and ball, Artist Event Cricket League (AECL) is soon to commence their upcoming season 3 of the cricket league.

Formed in 2019, AECL has been a mega success for the last two seasons with 8 and 16 teams participating in the respective seasons. Eminent and renowned personalities including , Sapna Choudhary, Hussain Kuwajerwala, Millind Gaba, Shibani Kashyap, Ashok Mastie, Tarun Dutt and DJ Sumit Sethi were present along with the founder/MD of AECL Ashish Mathur to officially announce the launch of the AECL Season 3 along with Mrs Sonia Verma (Co founder of Aasma Dance Company), Mr Ashish Rathee (Director of Verve Smasher), Mr Mayur Agarwal (Director of Spearmind Event & Founder of Bollyjammers) & Mr Manish Ahuja (Founder of Sajda Weddings & Tamasha Band) is the co founder for AECL 3rd season.

“The main objective behind organizing such a unique cricket league is to unite all the artists, event management companies on a single platform, for a booming business collaboration and future growth. Cricket is one such team game that has the potential to create opportunities to know each other better, share better bonding and this has already been witnessed in the last two seasons.” Said Ashish Mathur, Founder, AECL

The winners of the season will be offered a prize money of INR 2.5 Lakh along with the Champion’s Trophy, while Man of the Match after each match will be presented with a trophy and a gift.

Being in this artist industry for the last 15 years, Ashish started as a choreographer with Aasma Dance Company in 2004 and his wife was one of the finalists in the India’s Got Talent Season 2. Being from an artistic background, the couple knew the real struggle to survive in the industry and thus came up with this unique concept to bridge the artists, event planners and business. While there are no such known organisations functional in North India for the welfare of such artists, the couple also runs a trust by the name of NAWA – for the welfare of the artists.

Looking at the future perspectives, AECL will try that the upcoming seasons would involve artists from PAN India along with the involvement of the corporate sector with the artists and event companies, which will benefit all of them mutually.