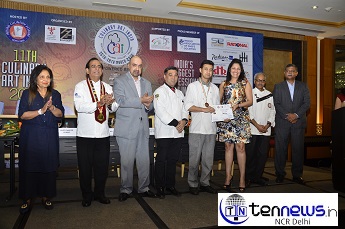 March 19, 2016: Indian Culinary Forum (ICF) organized the award night to recognize the winners of Culinary Art India 2016 for their exceptional culinary skills at  Radisson Blu MBD Hotel, Noida. Winners for the four day competition were awarded at this grand ceremony by chief guest Mr. Luv Malhotra, Vice President, FHRAI in the presence of renowned names from the hospitality fraternity. ‘Culinary Art India, 2016’ was organized by ICF in association with Hospitality First & ITPO as a part of Aahar International Food and Hospitality fair at Pragati Maidan from March 15 to March 18. ‘Culinary Art India, 2016’ is a platform to create awareness about the profession of chefs and felicitate the achievers in this line of work.

The chairman of the jury, Chef SHANLI ONG BENG YEW from Malaysia said, “Participants are refined and improved on their competitiveness in their overall Culinary approach. They took a good initiative to be more expressive in their presentation and creativity. They attempt good to explore in creating more flavorful dishes to touch on all 5 Senses.”

Speaking about CAI 2016, Chef Vivek Saggar, General Secretary, of Indian Culinary Forum said, “This Professional Culinary Challenge will be an event of international standards for chefs to display their masterly skill and to be accredited by a panel of internationally acclaimed judges. ICF has tied up with Tourism & Hospitality Skill Council to undertake international level certification of Chefs and F&B professionals under Pradhan Mantri Kaushal Vikas Yojna. ICF has taken the lead to contribute in Prime Minister’s ‘Skill India’ mission.”

ABOUT INDIAN CULINARY FORUM Indian Culinary Forum: The Indian Culinary Forum is India’s association of Professional chefs of Northern India. It was formed in New Delhi in 1987 as an exclusive non-profit-making organization, dedicated solely to the advancement of the culinary art of India. The Forum’s objective is to act as a link, a platform and an instrument for the enhancement and overall development of the national community of chefs. The World Association of Cooks Societies (WACS) is 110-nation fellowship comprising the world’s various professional chefs’ organization representing over 9 million professional chefs. The ICF, has an international culinary focus in staging of its various competitions, seminars and events. The aims of the ICF, broadly, are:

·   To encourage and inspire junior chefs through training and competition

·   To enhance international the culinary prestige to India.

·   To encourage Indian nationals to consider a career within the hospitality industry.

FLATS TO COST MORE AT #NOIDA, GRENO AND YAMUNA REGIONS