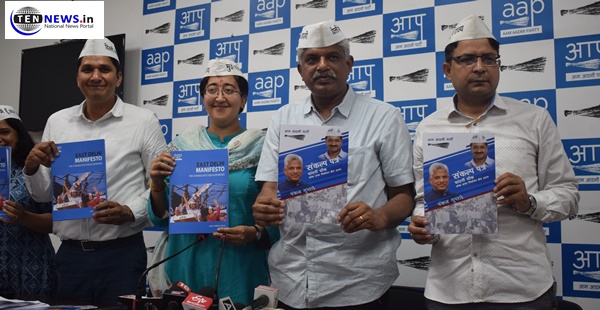 “The manifesto for Chandni Chowk Lok Sabha will focus Important issues which are important for my area like, education, traffic management, health, development of parks, land use, security and law and order, cleanliness and waste management, employment and skill development and I will work on all of these.”

“The decongestion of traffic, transforming the parks which are in poor condition l and Establish ‘start up hubs’ for generating employment among youth will be my top priority,” added Gupta.

AAP East Delhi Candidate stating Her Party’s Vision Document and her manifesto said, “The Promise of Women Safety, Better Public Transport, Good Education & Healthcare are our Top three Promises. Increasing number of PCR vans , and have a police station in every ward for women’s security. To develop first multi specialty hospital in East Delhi after getting land from DDA and we will Improve DDA gardens which are in bad conditions.”

While speaking to Ten News in a Exclusive Chat, Pankaj Gupta on his Competition with BJP’s Harsh Vardhan and Congress JP Agarwal, he said,

“From past 5-7 days what I’m looking is that there is no competition left. People are coming in large groups to support us. The love we are getting by the public on roads there body language suggests that we are winning all the seven seats in Delhi.”

“Gautam Gambhir is excellent Cricketer but a he is completely a novice politician. He said that he will debate after 2 years on the issues of East Delhi. So if you are planning to debate in two years time you should fight election after two years only.”