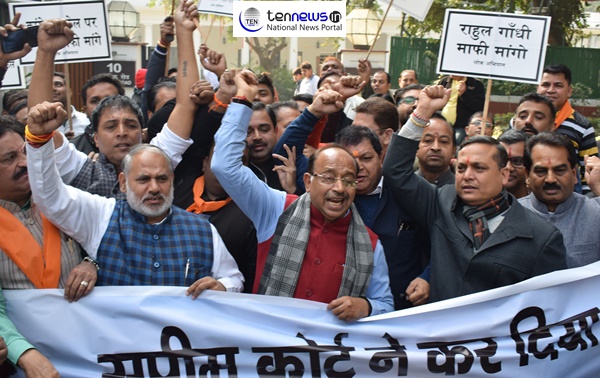 New Delhi : (15/12/18) Former Sports and Youth affairs Minister Vijay Goel on Saturday took part in a bike rally with supporters. The protest rally went up to All India Congress Committee office in the national capital.

After the judgment of Supreme Court regarding Rafale Deal Controversy BJP is now demanding Rahul Gandhi to explain reasons for accusing PM for scam in the defence deal related to Rafale Aircrafts.

BJP has maintained that Rafale is the need of Indian Air force for national security.
Many international aviation manufactures expressed interest when they got know about the Indian government’s plan to revamp its IAF fleet by introducing Multi-Role Combat Aircrafts. In order to replace MiG-21 aircraft, a case to procure 126 Mirage-2000 aircraft was initiated in 2000, which was later converted to a procurement of 126 MMRCAs. A Request For Proposal (RFP) was issued in 2007. The RFP for procurement of 126 MMRCA was finally issued in 2007.

IAF then conducted technical evaluations and flight evaluations and in 2011, declared that Rafale and Eurofighter Typhoon had met its criteria. Rafale was declared L-1 bidder in 2012 and contract negotiations began with its manufacturer, Dassault Aviation, that year. Contract negotiations remained incomplete even after 2 years, in 2014 due to a lack of agreement on various terms of RFP compliance and cost related issues. There was no deal under the UPA Government.

Indian National Congress last year accused Modi for playing with the honesty of this deal. Congress said that Modi has privately changed the deal and confirmed some of the Rafales to be purchased while rest of them to be produced in India itself. Rahul Gandhi then somehow calculated the scam to be worth thousands of crore.

Supreme Court after a long time declared the judgement of this case and called any investigation related to this deal to be unnecessary.

Today, Minister Vijay Goel while speaking to Ten News about the reasons related to the protest he organised by leading bike rally of hundreds towards Congress HQ said that,

“Rahul Gandhi is a young politician from Congress. He should be knowing the outcomes of unnecessarily blaming Prime Minister. He has been shouting on the bases of fake sources and did something that affects the morale of Indians.”

3 terrorist, I solider and 7 civilian killed during an encounter in Pulwama