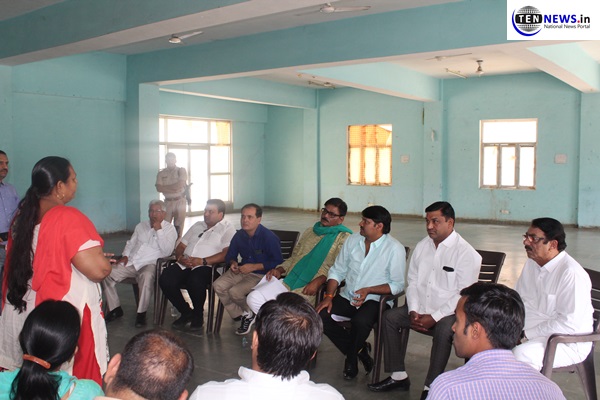 Today, a meeting regarding schools fee hike issue was organized in BETA I in presence of Jewar MLA Dhirendra Singh. The motive behind the meeting was to hear grievances of the parents who were getting troubled with schools fees hike and their irresponsible behavior. As well as to make them aware about the whole “Uttar Pradesh self-financed independent school fee regulation act” regulated by UP government to curb the fees hike.

In the meeting, Dhirendra Singh assured parents for raising the issue in front of government for increasing the income limit under RTI act which provides 25% reservation to such students under general category whose parent’s annual income is less than 1 lakh.

During the meeting, all the parents and members of the different social organization shared their grievances with Jewar MLA. They told how the schools are taking annual charges in every new session which is against the fee regulation act. A lady named Purnima Devi who’s the financial condition is not good and since last 2 years trying to enroll her children in Kendriya Vidyalaya. Even after approaching almost every responsible officer, local MP and MLA her children are still in a private school.

Interacting with Ten New Dhirendra Singh said, “I got aware of this fees hike issue and how parents were getting troubled with this. So as a public representative today I am here to make parents aware about fee regulation act. I am also trying to approach the government for making some changes in RTE act under which schools were bound to apply 25% reservation policy on students living in 1 km of school radius. Because of this act, most of the children remain deprived as villages are far away from cities where private schools are existing.”

“The second thing I am looking forward is to increase income limit under RTI act which provides 25% reservation to such students under general category whose parent’s annual income is less than 1 lakh”.

Under this act, no school can hike their fees more than 7 to 8 percent that too, after taking permission from the committee based on the consumer price index and an increase in salaries of staff, etc. Schools will also have to display fees on their website 60 days before the start of the academic session.

Greater Noida: Another murder in span of a month shocks Sector Alpha 2 as man kills…